Quantum memories are devices where one can store and retrieve quantum states. In his talk, Prof. Ignacio Cirac analyzed the robustness of quantum memories against decoherence, as well as those based on dissipation, whereby an interaction of the spins with an environment is properly engineered. He also analyzed the security of protocols using quantum memories, like those related to quantum money and credit cards, as well as some experimental attempts to extend the memory time of qubits at room temperature. 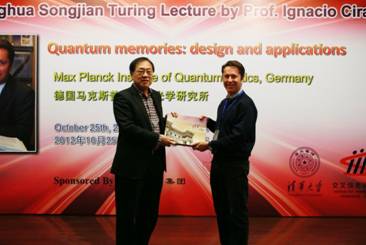 After the talk, Academician Yao presented a souvenir to Prof. Ignacio Cirac.

Prof. Ignacio Cirac is Director of the Theory Division at the Max-Planck Institute for Quantum Optics, Germany, a correspondent member of the Spanish and Austrian Academies of Science, and Fellow of the American Physical Society. His main areas of research are the theoretical description of atomic systems interacting with light, as well as the development of a theory of Quantum Information. He also holds many honorary awards such as the Medal (2003) of the Spanish Royal Physical Society, the Benjamin Franklin Medal (2010). During his week-long visit, Prof. Cirac shared academic views with IIIS faculty and students in the field of quantum information. 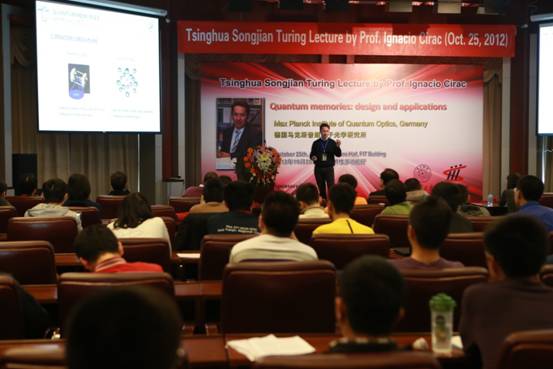 Since its inauguration in 2011, Tsinghua Turing Lecture has invited top international scholars from time to time, and has become a high-end lecture series in IIIS, even in Tsinghua. The event drew many scholars and students in the field of quantum information to come, and was sponsored by Mingyuan Group Co., Ltd.