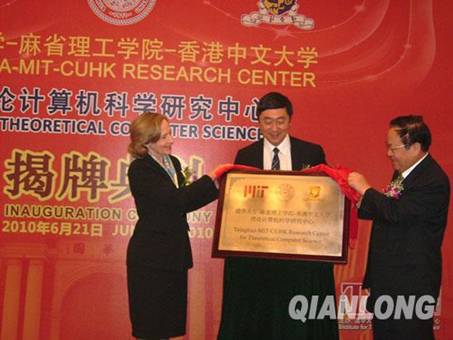 Presidents of Tsinghua, MIT and CUHK Unveiled the Plaque for the Research Center 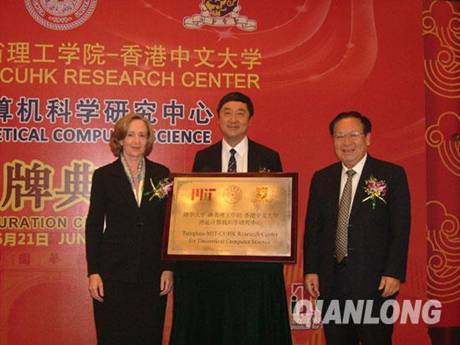 Presidents of Tsinghua, MIT and CUHK Took a Photo after the Unveiling Ceremony

BEIJING, June 21(Qianlong.com) ——The Tsinghua-MIT-CUHK Research Center for Theoretical Computer Science was inaugurated today at Tsinghua University. The Research Center is the first joint venture of its kind that MIT has established in China. It is also the first established by Tsinghua University with a top American university in the field of theoretical computer science.

In his remarks at the Inauguration Ceremony, Professor Andrew Chi-Chih Yao, Director of the Research Center, believed that it would provide a great platform for talents and serve as a bond between researchers on computer science at home and abroad. He pointed out that as great attention has been focused on the field of theoretical computer science nowadays, the Research Center has been founded for the purpose of conducting collaborative scientific research on theoretical computer science, whose initial research agenda is broadly construed on the theory of computation and will be expanded in time and with success to include additional research areas in computer science, such as computational biology and machine learning.

Directors of the Steering Committee are Si Yuan, Vice President of Tsinghua University, Philip Khoury, Associate Provost Office of the Provost, MIT and Pak-chung Ching, Pro-Vice-Chancellor of CUHK. Co-directors are Andrew Chi-Chih Yao on behalf of Tsinghua and CUHK and Silvio Micali on behalf of MIT. The Research Center aims to further promote China’s influence in computer science and push forward its progress through student exchange and cooperation.

Professor Andrew Chi-Chih Yao, world-renowned computer scientist, was educated at Taiwan University and later at Harvard, where he received a PhD in Physics in 1972. He decided to switch to computer science, foreseeing the unprecedented changes that computer science would bring to the global community. In 1975, he received his second PhD in computer science from the University of Illinois. His research interests include analysis of algorithms, computational complexity, cryptography and quantum computing. After serving on the faculty at the Massachusetts Institute of Technology (1975-1976), Stanford University (1976-1981, 1982-1986) and the University of California at Berkeley (1981-1982), he joined Princeton University in 1986 as the William and Edna Macaleer Professor of Engineering and Applied Science. In 2004, he left Princeton to become a Professor at Tsinghua University in Beijing and a Distinguished Professor-at-Large at the Chinese University of Hong Kong.

Professor Yao was awarded the A.M. Turing Award in 2000 for his contributions to the theory of computation, including communication complexity, pseudorandom number generation, and quantum communication. He is the first Chinese scientist to receive the prestigious Turing Award of the Association for Computing Machinery, the highest honor in computer science, widely regarded as the Nobel Prize of computing. Professor Yao has received numerous other honors and awards including the George Polya Prize, and the Donald E. Knuth Prize, and honorary degrees from the Chinese University of Hong Kong, the Hong Kong University of Science and Technology, the City University of Hong Kong, and the University of Waterloo. He is a member of the US National Academy of Sciences, the American Academy of Arts and Sciences and the Chinese Academy of Sciences.

The A. M. Turing Award is given annually by the Association for Computing Machinery to an individual selected for contributions of lasting and major technical importance to the computer field. The Turing Award is recognized as the “highest distinction in Computer Science” and the “Nobel Prize of computing”.