Changcun Ma from Grade 2007 spent three months at the Department of Computer Science at Carnegie Mellon University as a Visiting Scholar. Hosted by Prof. Avrim Blum and Prof. Venketesan Guruswami, he worked with the CMU research group on combinatorial algorithms and coding theory. Students from Grade 2008, Youming Qiao, Xiaohui Bei, Hongyu Liang and Jing He visited the University of Chicago, Upenn and Cornell University respectively. They conducted research under the supervision of renowned scholars and joined seminars and talks to share ideas with their counterparts in host universities. 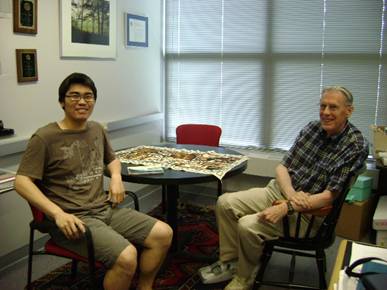 International academic settings have provided young students with a great platform to gain exposure to different research ideas and approaches as they mentioned in their summary.

Overseas academic visit is one important part of the Graduate Program at ITCS. Since 2007, ITCS students have carried out a number of short and long-term research activities. They also participate in high-level international conferences such as FOCS and IEEE INFOCOM.