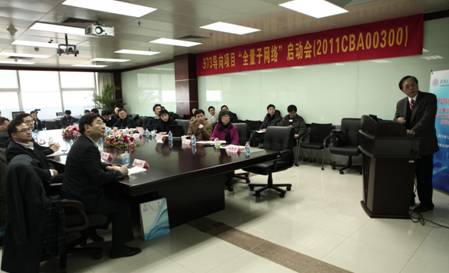 Prof. Andrew Yao first gave a brief introduction of the Project and illustrated its significance against current background. Quantum information, as an emerging cross-disciplinary area of subject in computer information science and quantum physics that provides a new technology in the post-Moore era, has explored new fundamentals and methods for the development of information science in the 21st century. Quantum information technology has grown into a focus in strategic competitions among countries. The overall Project goal is to develop the first “genuine quantum network” in the world within five years, maintaining our scientific advantage and leading position in research on genuine quantum network while demonstrating its priority on application platform.

The Project is independently undertaken by Tsinghua University, with Prof. Andrew Chi-Chih Yao, Prof. Amy Yuexuan Wang, Prof. Yidong Huang and Prof. Wei Chen as Chief Principals of the four Subprojects. Prof. Yao mentioned that, Tsinghua University is equipped with sound facilities in both theory and experiments of quantum network. The participation of Prof. Luming Duan has strongly boosted the research strength of the Project team. With the support of various departments, the Project will produce competitive results in five years. 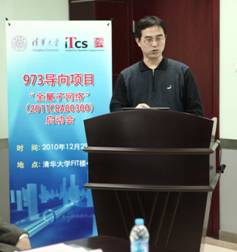 Mr. Yang addresses at the meeting

Officials and experts presented at the meeting extended warm congratulations on the kicking off of the Project. Mr. Yang said that, the “Genuine Quantum Network” Project was the first to commence among several 973 Programs undertaken by different universities. It is of great significance regarding its perspectiveness. He mentioned on behalf of the management body that the Project team should be wholly devoted in solving real problems as a team led by the Chief Scientist. 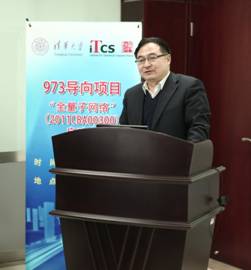 Mr. Fu addresses at the meeting

Mr. Fu shared his ideas that 973 Program Guiding Projects on Major Scientific Problems represent the trends in scientific and technological development as well as needs of the country. He wished that the Genuine Quantum Network Project would make progress through explorations and gain a leading role in the field of quantum technologies. 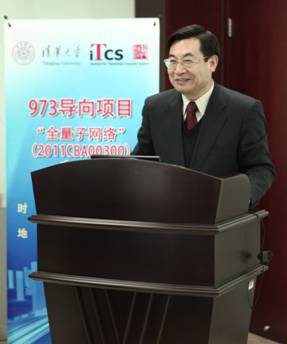 Prof. Hu addresses at the meeting

Prof. Hu expressed his thanks to the Project management bodies in his remarks. He admired Prof. Yao for his contributions in talent cultivation, talent attraction and discipline development since he joined Tsinghua University. He also appreciated the participation of Prof. Duan in the Project. Prof. Hu believed that based on his perspectiveness in information science and networks, Prof. Yao initiated the highly innovative Genuine Quantum Network Project, the commencement of which is a landmark in the development of information and network technologies. He also pointed out that the interdisciplinary research team Prof. Yao established at Tsinghua University would join efforts in promoting the development of quantum information, quantum technologies and networks as well as other disciplines of Tsinghua University. On behalf of Tsinghua University, Prof. Hu showed his utmost support for the Project and hoped that, under the leadership of Prof. Yao, it would come up with cutting-edge results and secure a leading role in quantum technologies.

The kick-off meeting ended in success. 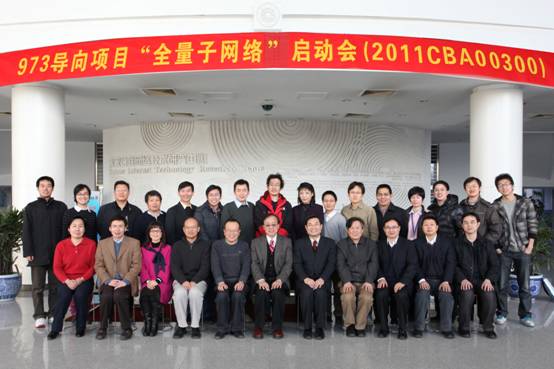