Ronald Graham, Silvio Micali, Bernard Chazelle……As members of Chair Professor Team in ITCS of Tsinghua University, these “academic stars” in the field of international theoretical computer science had a face-to-face talking with Tsinghua students in FIT Building on the afternoon of October 15 to discuss on how to cultivate top talents in the field of theoretical computer science in China and shared their life and academic experience with them. 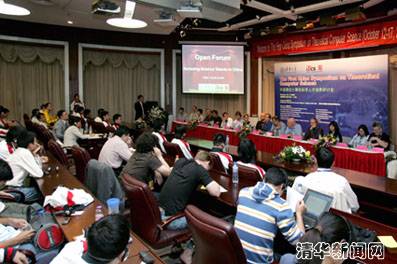 In the Lecture Hall, 20 scholars sat together, and the room was full of students from Tsinghua and other universities. Turing Award Recipient, world-famous scientist in the field of computing, professor of Tsinghua University Andrew Chi-Chih Yao gave an opening remark and hosted the whole open forum.

Scholars spoke on questions such as the impact of computer science in future social development, how to cultivate creative undergraduate students and Ph.D. candidates, and what should universities do to cultivate top students.

Prof. Silvio Micali from MIT, a member of US National Academy and member of Academy of Engineering said that theory played a very important role in all sciences, not only in computer science. Theoretical computer science is a linking bond among disciplines like biology, economics and physics, sometimes even in astrophysics.

Nevanlinna Prize Winner, Prof. Avi Wigderson from Advanced Study Centre of Princeton thought that it is difficult to solve problems depending on one discipline. When you cannot solve the problem, just think out of the details and study theories. You will make new progress if thinking from the perspective of theory. From this aspect, theoretical computer science will still play an important role in science development. 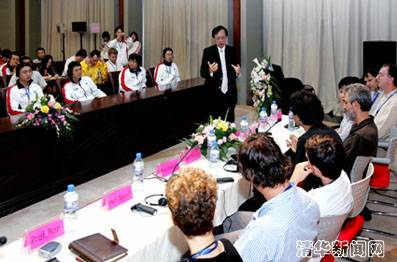 Member of US Academy of Arts, Prof. Bernard Chazelle from Princeton sat an example on receiving the invitation from a biologist from Princeton, asking him to give a lecture on informatITCS to students in the department of biology. He clarified that undergraduate students should learn more disciplines instead of concentrating on their own disciplines too much. Universities should set a curriculum of comprehensive course. He said: “When designing courses on computer science, people should focus not only on computer science but on other scientific disciplines as well. That is to say, you need to ask yourself from time to time, what the biggest challenge is in the 21st century, and how disciplines will adapt to new conditions. We encourage Tsinghua students to take part in such a thinking process.” 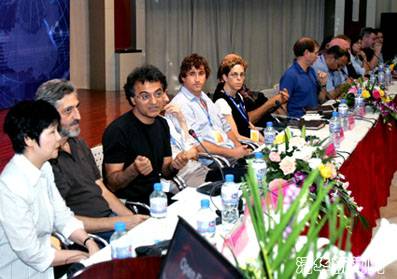 Scholars gave their wonderful suggestions on how to choose one’s own research path for students and how to cultivate innovation.

Member of US Academy of Science and Chief Scientist from UC San Diego Prof. Ronald Graham spoke with fluent Chinese: “I know Tsinghua students are very smart.” He reminded all the students of having more interactions among peers, study broadly instead of limiting study range on one field since the number of fields computer science involved in is enlarging. He encouraged students to be brave to attempt. He said: “In UC San Diego, a professor who just received Nobel Prize said that if you are going to do really innovative things, you have to break the rules. So we should break the rules and do not fear failure. Good judgment comes from experience, and experience comes from bad judgment.”

He said: “The main obstacle to progress is not ignorance but the illusion of knowledge. Once you understand you don’t know something, then that really opens the way for further understanding and so you know you shouldn’t be convinced by authority. If all the authority and all the experts cannot solve a problem, they are probably not looking at it in a right way.”

Member of US Academy of Science, member of Academy of Engineering, member of US Academy of Arts, Prof. Shafi Goldwasser from Weizmann Institute of Israel told the students to trust your feeling and your taste. She encouraged students to have access to academic research as early as possible in order to confirm their own future research orientation. She said: “New problems should be explored widely, and do the research as early as possible. In this way, you could train your own way of thinking to make it sharper.”

Then, students asked questions on their confusion and doubt during study and research. Professors listened very carefully and answered in details. The 45-minutes’ open forum lasted 2 hours. Many students had interactions with professors after the forum.

When the open forum closed to an end, a student from Peking University stood up and asked Prof. Yao if institutes like ITCS could be set up in other universities. Prof. Yao said: “You are really smart because I’ve been getting this suggestion from many of the distinguished professors and also as you heard I think several of them have expressed their opinion that there should be some other universities setting up institutes like ITCS to promote the development of theoretical computer science in China." He said that he hoped the student could join the academic discussion of ITCS. 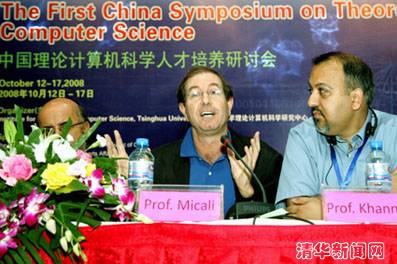 Wenbin Tang, a third-year student from Tsinghua Special CS Pilot Class, said: “The open forum gives me a lot of enlightenment such as how to find one’s own orientation, and how to arrange one’s schedule. I think I should consider these questions from now on.”

This open forum is a part of the First Symposium on Theoretical Computer Science and is hosted by ITCS of Tsinghua University.