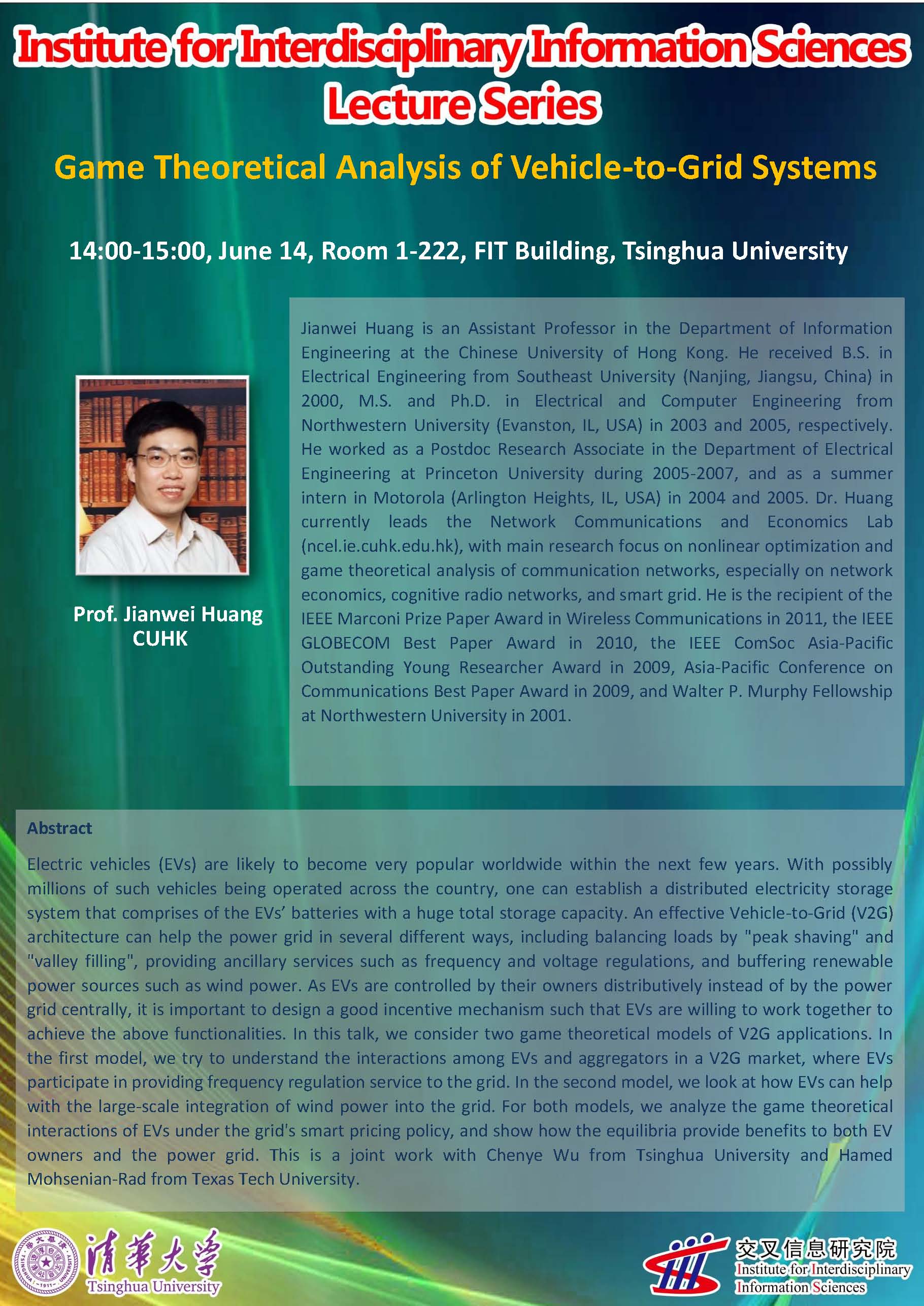 
Electric vehicles (EVs) are likely to become very popular worldwide within the next few years. With possibly millions of such vehicles being operated across the country, one can establish a distributed electricity storage system that comprises of the EVs’ batteries with a huge total storage capacity. An effective Vehicle-to-Grid (V2G) architecture can help the power grid in several different ways, including balancing loads by "peak shaving" and "valley filling", providing ancillary services such as frequency and voltage regulations, and buffering renewable power sources such as wind power. As EVs are controlled by their owners distributively instead of by the power grid centrally, it is important to design a good incentive mechanism such that EVs are willing to work together to achieve the above functionalities. In this talk, we consider two game theoretical models of V2G applications. In the first model, we try to understand the interactions among EVs and aggregators in a V2G market, where EVs participate in providing frequency regulation service to the grid. In the second model, we look at how EVs can help with the large-scale integration of wind power into the grid. For both models, we analyze the game theoretical interactions of EVs under the grid's smart pricing policy, and show how the equilibria provide benefits to both EV owners and the power grid. This is a joint work with Chenye Wu from Tsinghua University and Hamed Mohsenian-Rad from Texas Tech University.


Jianwei Huang is an Assistant Professor in the Department of Information Engineering at the Chinese University of Hong Kong. He received B.S. in Electrical Engineering from Southeast University (Nanjing, Jiangsu, China) in 2000, M.S. and Ph.D. in Electrical and Computer Engineering from Northwestern University (Evanston, IL, USA) in 2003 and 2005, respectively. He worked as a Postdoc Research Associate in the Department of Electrical Engineering at Princeton University during 2005-2007, and as a summer intern in Motorola (Arlington Heights, IL, USA) in 2004 and 2005. Dr. Huang currently leads the Network Communications and Economics Lab (ncel.ie.cuhk.edu.hk), with main research focus on nonlinear optimization and game theoretical analysis of communication networks, especially on network economics, cognitive radio networks, and smart grid. He is the recipient of the IEEE Marconi Prize Paper Award in Wireless Communications in 2011, the IEEE GLOBECOM Best Paper Award in 2010, the IEEE ComSoc Asia-Pacific Outstanding Young Researcher Award in 2009, Asia-Pacific Conference on Communications Best Paper Award in 2009, and Walter P. Murphy Fellowship at Northwestern University in 2001.