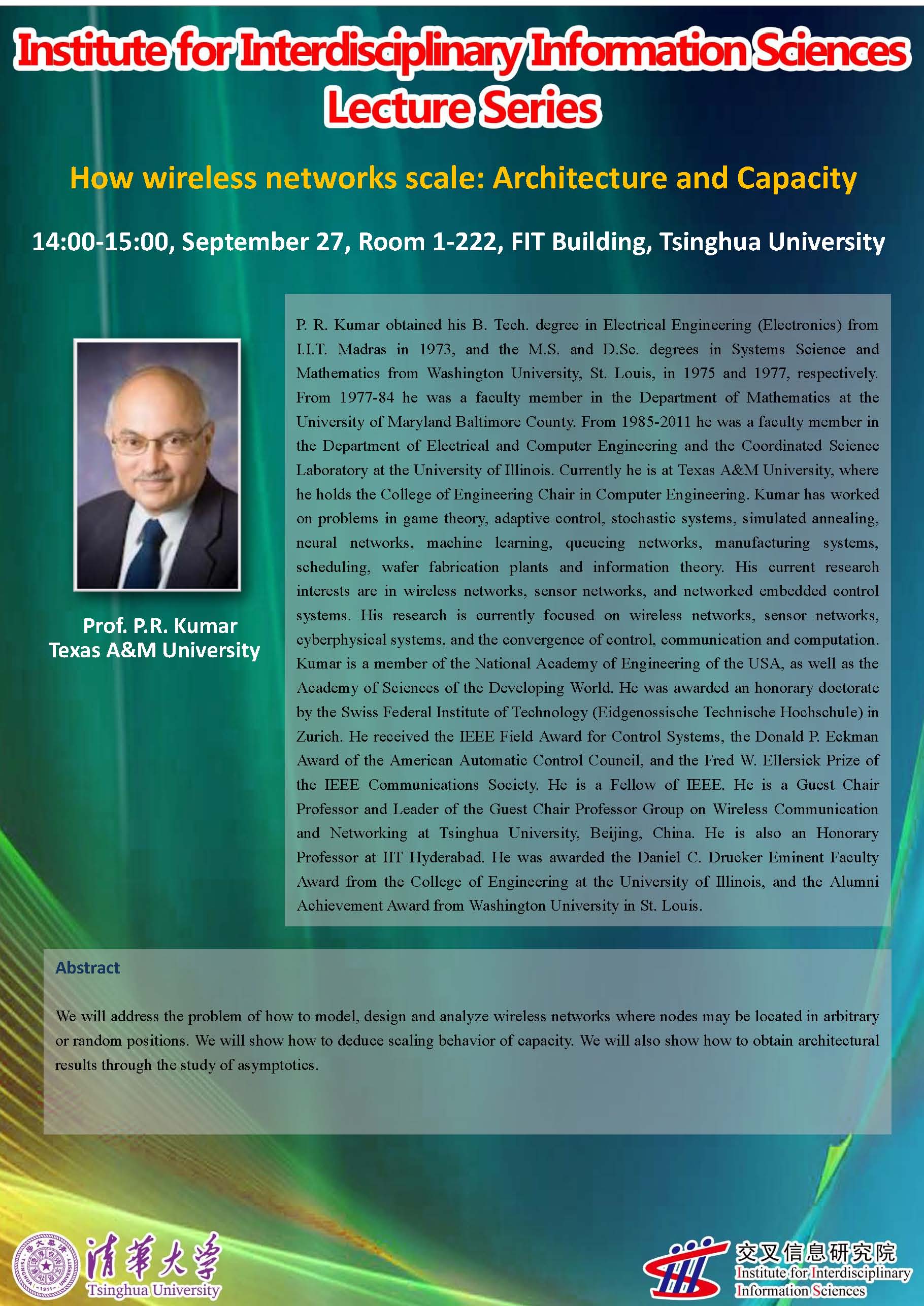 We will address the problem of how to model, design and analyze wireless networks where nodes may be located in arbitrary or random positions. We will show how to deduce scaling behavior of capacity. We will also show how to obtain architectural results through the study of asymptotics.


P. R. Kumar obtained his B. Tech. degree in Electrical Engineering (Electronics) from I.I.T. Madras in 1973, and the M.S. and D.Sc. degrees in Systems Science and Mathematics from Washington University, St. Louis, in 1975 and 1977, respectively. From 1977-84 he was a faculty member in the Department of Mathematics at the University of Maryland Baltimore County. From 1985-2011 he was a faculty member in the Department of Electrical and Computer Engineering and the Coordinated Science Laboratory at the University of Illinois. Currently he is at Texas A&M University, where he holds the College of Engineering Chair in Computer Engineering. Kumar has worked on problems in game theory, adaptive control, stochastic systems, simulated annealing, neural networks, machine learning, queueing networks, manufacturing systems, scheduling, wafer fabrication plants and information theory. His current research interests are in wireless networks, sensor networks, and networked embedded control systems. His research is currently focused on wireless networks, sensor networks, cyberphysical systems, and the convergence of control, communication and computation. Kumar is a member of the National Academy of Engineering of the USA, as well as the Academy of Sciences of the Developing World. He was awarded an honorary doctorate by the Swiss Federal Institute of Technology (Eidgenossische Technische Hochschule) in Zurich. He received the IEEE Field Award for Control Systems, the Donald P. Eckman Award of the American Automatic Control Council, and the Fred W. Ellersick Prize of the IEEE Communications Society. He is a Fellow of IEEE. He is a Guest Chair Professor and Leader of the Guest Chair Professor Group on Wireless Communication and Networking at Tsinghua University, Beijing, China. He is also an Honorary Professor at IIT Hyderabad. He was awarded the Daniel C. Drucker Eminent Faculty Award from the College of Engineering at the University of Illinois, and the Alumni Achievement Award from Washington University in St. Louis.