China Theory Week: Rumors and Connections - In Practice and in Theory

The rumor is true! The Computer Science Department at Aarhus University just hosted “China Theory Week” for some of the best Ph.D. students in the world. A great opportunity for young computer science researchers to make new connections - and to do research on connections. 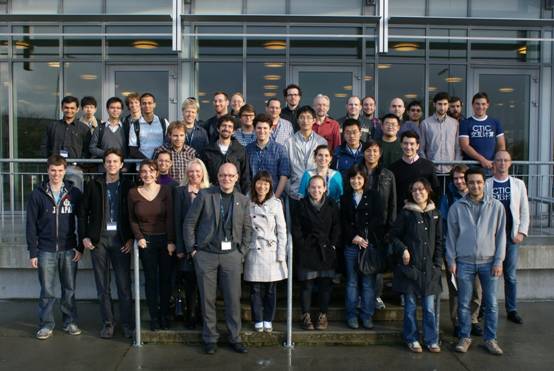 How long time does it take till everybody knows everything? This is one of the topics at this week’s China Theory Week at the Computer Science Department. Tuesday morning, three Ph.D. students gave their talks about the theory of rumor spreading and relationships in social networks. But the participants do not just talk about networking. A fully packed research and social program gives them the opportunity to make connections with other computer science researchers.

- The China Theory Week is a great concept, says participant Jon Ullman, Ph.D. student at Harvard University. - You’ll get a change to actually meet and talk to interesting people, not just participating to present their paper.

"China Theory Week" is a yearly workshop that was arranged every fall since 2007 at Tsinghua University in Beijing, China. The workshop series was initiated by Turing prize laureate Andrew Yao and has a very simple concept: Bring together the twenty most accomplished PhD students within theoretical computer science worldwide and let them interact with one another and with local PhD students for a week.

This year, the workshop is held for the first time outside of China. It is arranged by CTIC, the Sino-Danish Center for the Theory of Interactive Computation, funded by the Danish National Research Foundation and the National Science Foundation of China. Five days about algorithms, complexity theory, cryptography, quantum informatics, game theory, and as mentioned: rumor spreading in social networks.

- The main reason to do research in rumor spreading is because it is fun, and produces a lot of articles. No, actually because it helps us understand how not just rumors but also computer viruses and diseases spread. And how fast, Mahmoud Fouz, PhD student at Saarland University, explains.

The program leaves plenty of time to make connections. You can see the fully program here:

And the rumor about Computer Science at Aarhus University?

- The rumor is true. The University is a nice place. I know some of the researchers from conferences outside Denmark, but it is nice to meet them and other students on their own turf, Allison Lewko, ph.d student from Texas University says with a smile.