Turing Lecture: Evolution of Communication and Computer Technology and Beyond 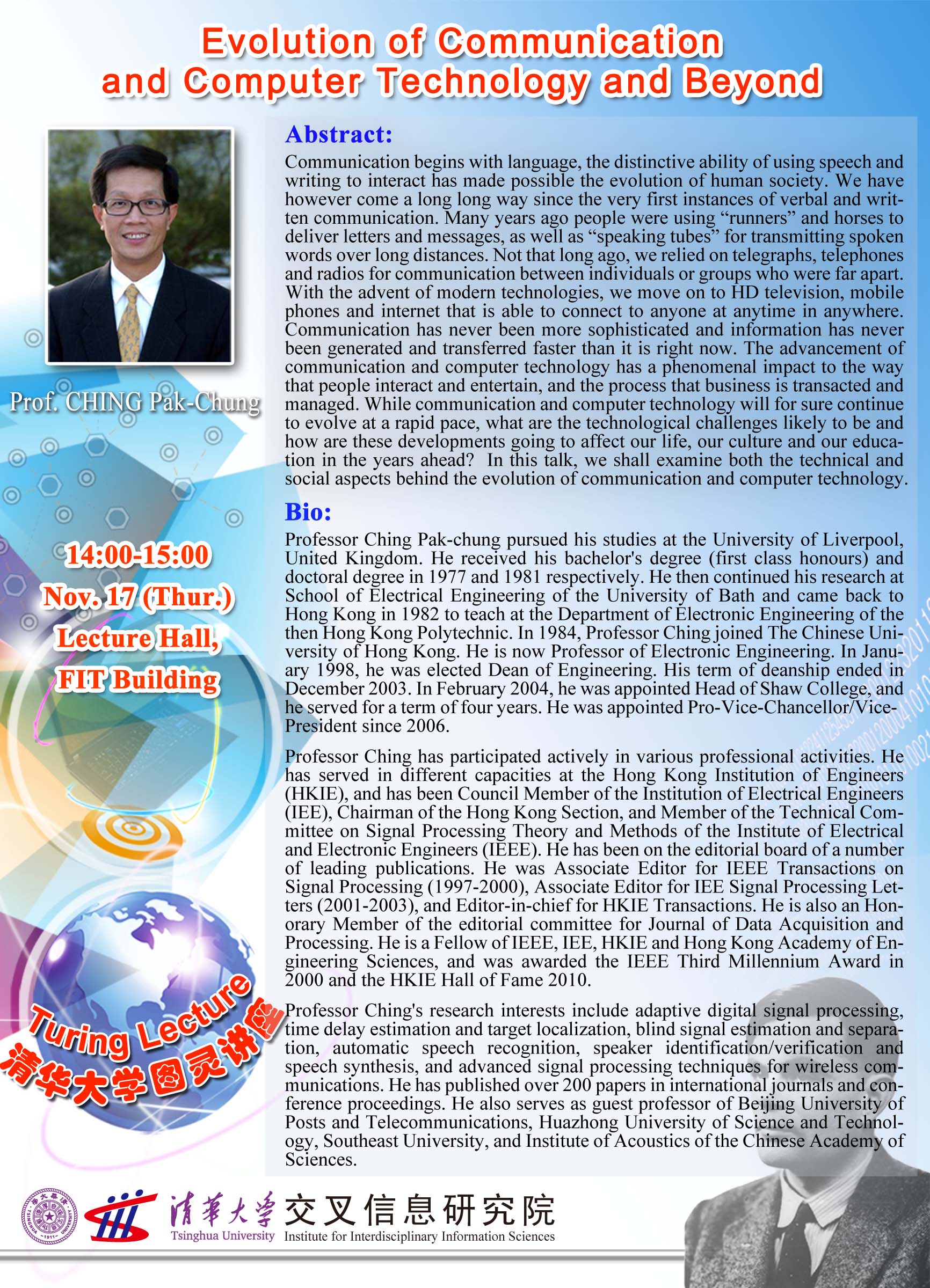 Communication begins with language, the distinctive ability of using speech and writing to interact has made possible the evolution of human society. We have however come a long long way since the very first instances of verbal and written communication. Many years ago people were using “runners” and horses to deliver letters and messages, as well as “speaking tubes” for transmitting spoken words over long distances. Not that long ago, we relied on telegraphs, telephones and radios for communication between individuals or groups who were far apart. With the advent of modern technologies, we move on to HD television, mobile phones and internet that is able to connect to anyone at anytime in anywhere. Communication has never been more sophisticated and information has never been generated and transferred faster than it is right now. The advancement of communication and computer technology has a phenomenal impact to the way that people interact and entertain, and the process that business is transacted and managed. While communication and computer technology will for sure continue to evolve at a rapid pace, what are the technological challenges likely to be and how are these developments going to affect our life, our culture and our education in the years ahead?  In this talk, we shall examine both the technical and social aspects behind the evolution of communication and computer technology.


Professor Ching Pak-chung pursued his studies at the University of Liverpool, United Kingdom. He received his bachelor's degree (first class honours) and doctoral degree in 1977 and 1981 respectively. He then continued his research at School of Electrical Engineering of the University of Bath and came back to Hong Kong in 1982 to teach at the Department of Electronic Engineering of the then Hong Kong Polytechnic. In 1984, Professor Ching joined The Chinese University of Hong Kong. He is now Professor of Electronic Engineering. In January 1998, he was elected Dean of Engineering. His term of deanship ended in December 2003. In February 2004, he was appointed Head of Shaw College, and he served for a term of four years. He was appointed Pro-Vice-Chancellor/Vice-President since 2006.

Professor Ching has participated actively in various professional activities. He has served in different capacities at the Hong Kong Institution of Engineers (HKIE), and has been Council Member of the Institution of Electrical Engineers (IEE), Chairman of the Hong Kong Section, and Member of the Technical Committee on Signal Processing Theory and Methods of the Institute of Electrical and Electronic Engineers (IEEE). He has been on the editorial board of a number of leading publications. He was Associate Editor for IEEE Transactions on Signal Processing (1997-2000), Associate Editor for IEE Signal Processing Letters (2001-2003), and Editor-in-chief for HKIE Transactions. He is also an Honorary Member of the editorial committee for Journal of Data Acquisition and Processing. He is a Fellow of IEEE, IEE, HKIE and Hong Kong Academy of Engineering Sciences, and was awarded the IEEE Third Millennium Award in 2000 and the HKIE Hall of Fame 2010.