A Visit from MIT to ITCS

On September 21, a delegation from Massachusetts Institute of Technology (MIT) headed by its Vice President Philip S. Khoury paid a visit to ITCS and discussed with Academician Andrew Yao on the establishment of a joint research center between MIT and ITCS which involves students exchange program and scientific cooperation in the future. Prof. Khoury, proposed to establish a united research center between MIT and ITCS, in a meeting with Binglin Gu, President of Tsinghua University. President Gu spoke highly of this program, thinking it would be of great significance to and be a highlight of the centennial celebration of Tsinghua University in 2011.  Mr. O’Neil A.S. Outar, Head of International Affairs Office, and Prof. Victor Zue, Director of Computer Science and Human Intelligence Laboratory also joined the discussion.

Since its establishment, ITCS has maintained a good relationship with MIT. The students and teachers of the Institute pay frequent visits to MIT, and so do the students and teachers in MIT. Among the four foreign postdocs who joined ITCS in September, two of them graduated from MIT. And also in early September this year, three pre-graduate students from CS Special Pilot Class, established by Prof. Yao, were sent to MIT for a one-hundred-day’s academic exchange. 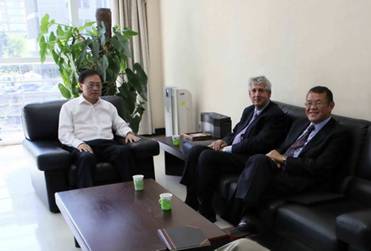