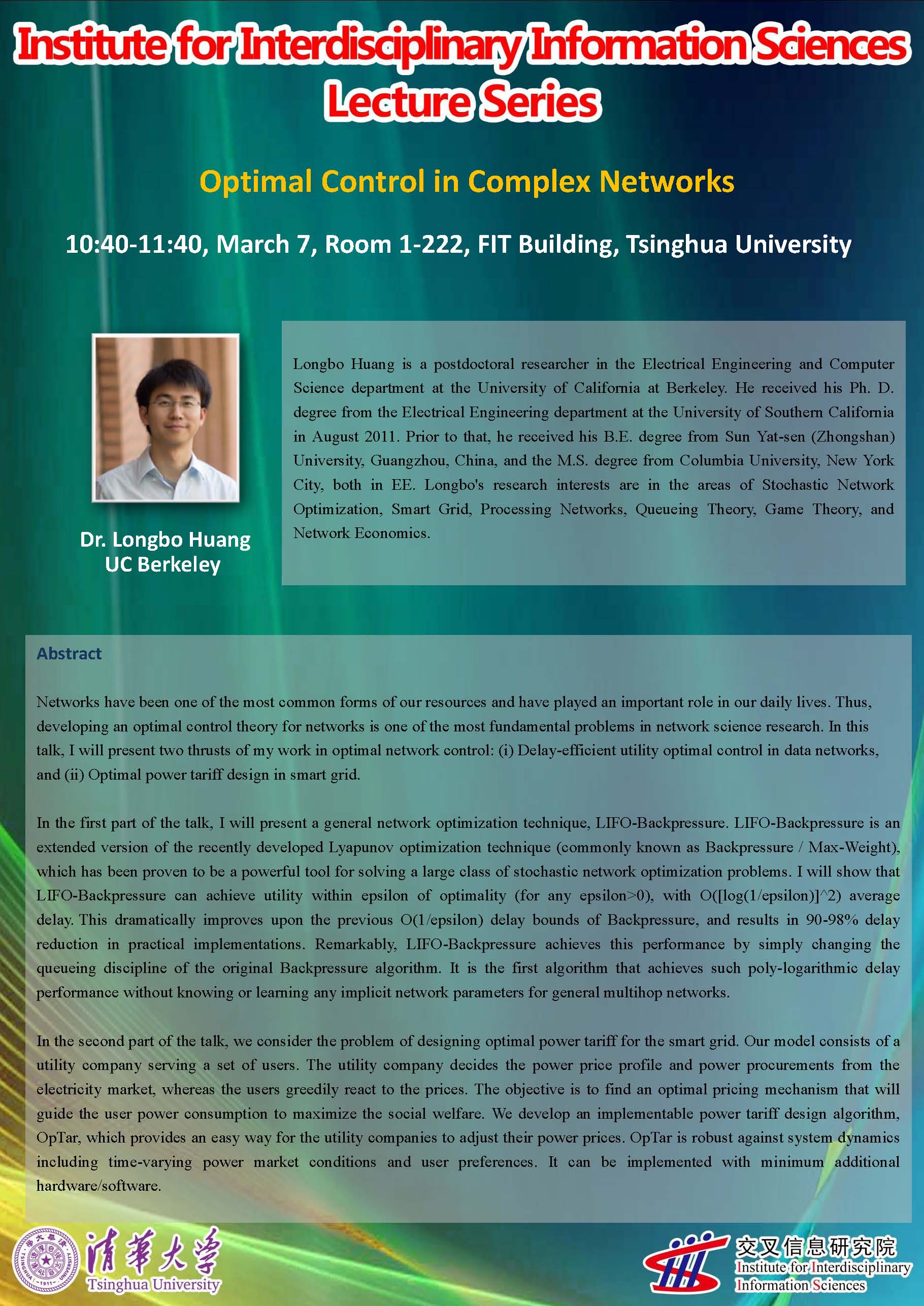 Networks have been one of the most common forms of our resources and have played an important role in our daily lives. Thus, developing an optimal control theory for networks is one of the most fundamental problems in network science research. In this talk, I will present two thrusts of my work in optimal network control: (i) Delay-efficient utility optimal control in data networks, and (ii) Optimal power tariff design in smart grid.

In the first part of the talk, I will present a general network optimization technique, LIFO-Backpressure. LIFO-Backpressure is an extended version of the recently developed Lyapunov optimization technique (commonly known as Backpressure / Max-Weight), which has been proven to be a powerful tool for solving a large class of stochastic network optimization problems. I will show that LIFO-Backpressure can achieve utility within epsilon of optimality (for any epsilon>0), with O([log(1/epsilon)]^2) average delay. This dramatically improves upon the previous O(1/epsilon) delay bounds of Backpressure, and results in 90-98% delay reduction in practical implementations. Remarkably, LIFO-Backpressure achieves this performance by simply changing the queueing discipline of the original Backpressure algorithm. It is the first algorithm that achieves such poly-logarithmic delay performance without knowing or learning any implicit network parameters for general multihop networks.

In the second part of the talk, we consider the problem of designing optimal power tariff for the smart grid. Our model consists of a utility company serving a set of users. The utility company decides the power price profile and power procurements from the electricity market, whereas the users greedily react to the prices. The objective is to find an optimal pricing mechanism that will guide the user power consumption to maximize the social welfare. We develop an implementable power tariff design algorithm, OpTar, which provides an easy way for the utility companies to adjust their power prices. OpTar is robust against system dynamics including time-varying power market conditions and user preferences. It can be implemented with minimum additional hardware/software.


Longbo Huang is a postdoctoral researcher in the Electrical Engineering and Computer Science department at the University of California at Berkeley. He received his Ph. D. degree from the Electrical Engineering department at the University of Southern California in August 2011. Prior to that, he received his B.E. degree from Sun Yat-sen (Zhongshan) University, Guangzhou, China, and the M.S. degree from Columbia University, New York City, both in EE. Longbo's research interests are in the areas of Stochastic Network Optimization, Smart Grid, Processing Networks, Queueing Theory, Game Theory, and Network Economics.
<![endif]-->
Login