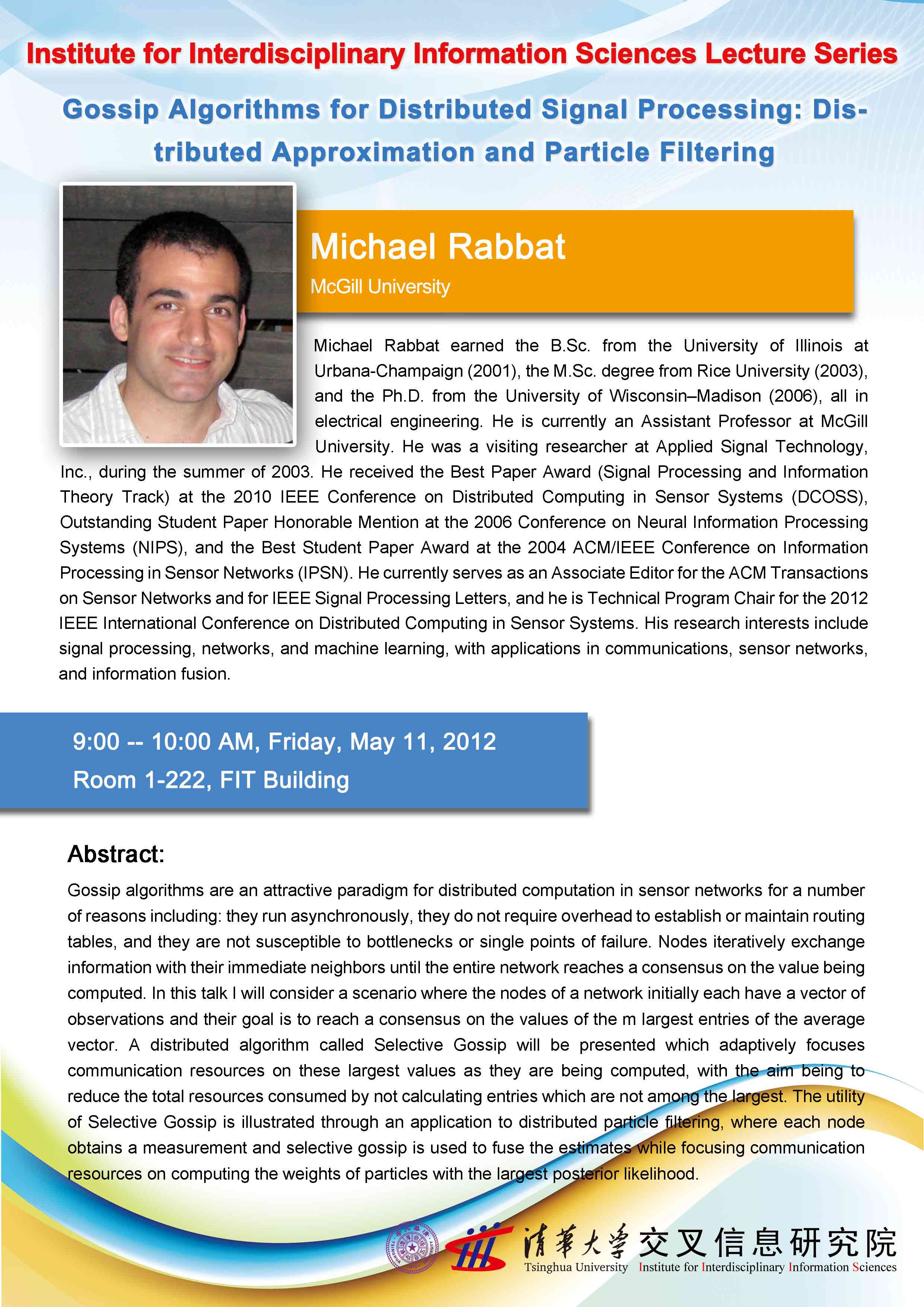 Gossip algorithms are an attractive paradigm for distributed computation in sensor networks for a number of reasons including: they run asynchronously, they do not require overhead to establish or maintain routing tables, and they are not susceptible to bottlenecks or single points of failure. Nodes iteratively exchange information with their immediate neighbors until the entire network reaches a consensus on the value being computed. In this talk I will consider a scenario where the nodes of a network initially each have a vector of observations and their goal is to reach a consensus on the values of the m largest entries of the average vector. A distributed algorithm called Selective Gossip will be presented which adaptively focuses communication resources on these largest values as they are being computed, with the aim being to reduce the total resources consumed by not calculating entries which are not among the largest. The utility of Selective Gossip is illustrated through an application to distributed particle filtering, where each node obtains a measurement and selective gossip is used to fuse the estimates while focusing communication resources on computing the weights of particles with the largest posterior likelihood.


Michael Rabbat earned the B.Sc. from the University of Illinois at Urbana-Champaign (2001), the M.Sc. degree from Rice University (2003), and the Ph.D. from the University of Wisconsin–Madison (2006), all in electrical engineering. He is currently an Assistant Professor at McGill University. He was a visiting researcher at Applied Signal Technology, Inc., during the summer of 2003. He received the Best Paper Award (Signal Processing and Information Theory Track) at the 2010 IEEE Conference on Distributed Computing in Sensor Systems (DCOSS), Outstanding Student Paper Honorable Mention at the 2006 Conference on Neural Information Processing Systems (NIPS), and the Best Student Paper Award at the 2004 ACM/IEEE Conference on Information Processing in Sensor Networks (IPSN). He currently serves as an Associate Editor for the ACM Transactions on Sensor Networks and for IEEE Signal Processing Letters, and he is Technical Program Chair for the 2012 IEEE International Conference on Distributed Computing in Sensor Systems. His research interests include signal processing, networks, and machine learning, with applications in communications, sensor networks, and information fusion.
<![endif]-->
Login