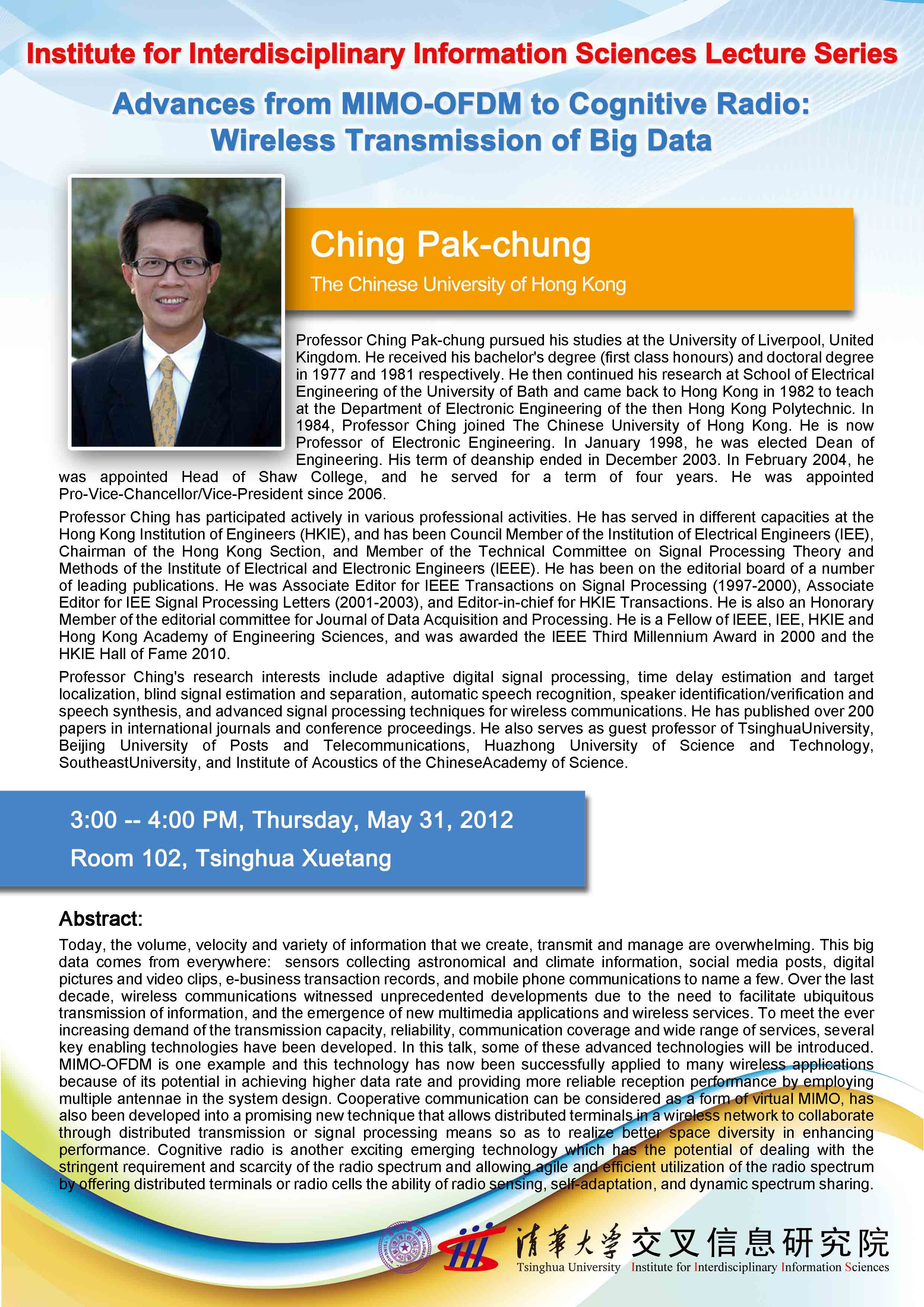 Today, the volume, velocity and variety of information that we create, transmit and manage are overwhelming. This big data comes from everywhere:  sensors collecting astronomical and climate information, social media posts, digital pictures and video clips, e-business transaction records, and mobile phone communications to name a few. Over the last decade, wireless communications witnessed unprecedented developments due to the need to facilitate ubiquitous transmission of information, and the emergence of new multimedia applications and wireless services. To meet the ever increasing demand of the transmission capacity, reliability, communication coverage and wide range of services, several key enabling technologies have been developed. In this talk, some of these advanced technologies will be introduced. MIMO-OFDM is one example and this technology has now been successfully applied to many wireless applications because of its potential in achieving higher data rate and providing more reliable reception performance by employing multiple antennae in the system design. Cooperative communication can be considered as a form of virtual MIMO, has also been developed into a promising new technique that allows distributed terminals in a wireless network to collaborate through distributed transmission or signal processing means so as to realize better space diversity in enhancing performance. Cognitive radio is another exciting emerging technology which has the potential of dealing with the stringent requirement and scarcity of the radio spectrum and allowing agile and efficient utilization of the radio spectrum by offering distributed terminals or radio cells the ability of radio sensing, self-adaptation, and dynamic spectrum sharing.

Professor Ching Pak-chung pursued his studies at the University of Liverpool, United Kingdom. He received his bachelor's degree (first class honours) and doctoral degree in 1977 and 1981 respectively. He then continued his research at School of Electrical Engineering of the University of Bath and came back to Hong Kong in 1982 to teach at the Department of Electronic Engineering of the then Hong Kong Polytechnic. In 1984, Professor Ching joined The Chinese University of . He is now Professor of Electronic Engineering. In January 1998, he was elected Dean of Engineering. His term of deanship ended in December 2003. In February 2004, he was appointed Head of Shaw College, and he served for a term of four years. He was appointed Pro-Vice-Chancellor/Vice-President since 2006.

Professor Ching has participated actively in various professional activities. He has served in different capacities at the Hong Kong Institution of Engineers (HKIE), and has been Council Member of the Institution of Electrical Engineers (IEE), Chairman of the Hong Kong Section, and Member of the Technical Committee on Signal Processing Theory and Methods of the and Electronic Engineers (IEEE). He has been on the editorial board of a number of leading publications. He was Associate Editor for IEEE Transactions on Signal Processing (1997-2000), Associate Editor for IEE Signal Processing Letters (2001-2003), and Editor-in-chief for HKIE Transactions. He is also an Honorary Member of the editorial committee for Journal of Data Acquisition and Processing. He is a Fellow of IEEE, IEE, HKIE and Hong Kong Academy of Engineering Sciences, and was awarded the IEEE Third Millennium Award in 2000 and the HKIE Hall of Fame 2010.

Professor Ching's research interests include adaptive digital signal processing, time delay estimation and target localization, blind signal estimation and separation, automatic speech recognition, speaker identification/verification and speech synthesis, and advanced signal processing techniques for wireless communications. He has published over 200 papers in international journals and conference proceedings. He also serves as guest professor of , Beijing University of Posts and Telecommunications, Huazhong University of Science and Technology, , and  of  of the of Science.