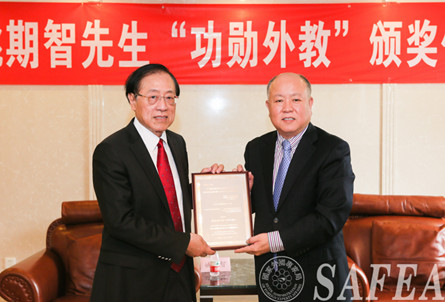 On July 4, Liu Yanguo, deputy head of SAFEA, gave the award for Most Outstanding Foreign Teacher to Andrew Chi-Chih Yao, a Turing Award winner in 2000 and director of the Institute for Interdisciplinary Information Sciences at Tsinghua University.

This year marked the 60th anniversary of the establishment of SAFEA. In order to honor the contribution of foreign teachers, the magazine International Talent and the China Society for Research on International Professional Personnel Exchange and Development selected 10 “Most Outstanding Foreign Teachers” working in China, based on their teaching, contributions to the education sector and their influence. 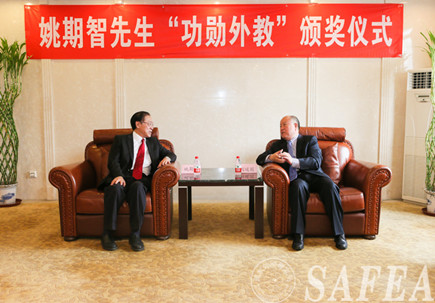 Andrew Chi-Chih Yao is an internationally well-known computer scientist. He resigned from Princeton University in 2004 and worked for Tsinghua University in Beijing as a full-time professor, where he explores the training of international leading talent in computer science in China. Led by Yao, Tsinghua Xuetang Special Pilot CS Class (Yao Class), Institute for Theoretical Computer Science, Institute for Interdisciplinary Information Sciences and Center for Quantum Information were established at Tsinghua.

Andrew Chi-Chih Yao made many fundamental contributions to the theory of computation. Established by Yao, the Institute for Theoretical Computer Science at Tsinghua University, has become a leading computer research center in the world. The world's first quantum router was developed and tested by the Center for Quantum Information.

In 2005, he won the Friendship Award, which is granted by the Chinese government. In 2010, he was selected as one of the Top 10 Newsmakers in Education Sector of Beijing. The Tsinghua Xuetang Special Pilot CS Class, led byYao, won the Special Prize for Outstanding Education Program at Tsinghua University.