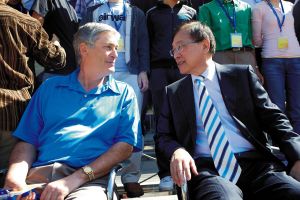 Andrew Chi-Chih Yao (right), director of the Institute for Theoretical Computer Science at China's Tsinghua U., brings in scholars, like Ian Munro of Canada's U. of Waterloo, to enhance a program increasingly known abroad.

Andrew Chi-Chih Yao's trajectory suggests a genius's quick ascent to success. Born in Shanghai, he studied hard, earned two Ph.D.'s from American universities, and at age 35 was a professor of computer science at Stanford University. By 2000, when he received the A.M. Turing Award, one of the most prestigious prizes in his field, younger computer scientists were memorizing a principle bearing his name.

But when Tsinghua University invited him to return to China to lead a new, generously financed institute in 2004, he jumped at the opportunity. "I was very excited," he recalls.

In creating the Institute for Theoretical Computer Science, Mr. Yao says, he had free rein from Tsinghua's administrators to determine everything from research topics to personnel.

Once in Beijing, he threw himself into the project, emerging with an institute that is today one of the university's jewels and is increasingly known outside China.

The way Mr. Yao's institute was created illustrates a central element of China's higher-education strategy. When the government decides it wants to do something, it does it, and fast.

Theoretical computer science—the abstract, intensely mathematical subfield that is Mr. Yao's specialty—is poorly financed in the United States. It wasn't originally a target area for China, either. But China has an approach different from that found in the United States: a desire to build outstanding institutions by attracting the leaders in a field—any field.

Mr. Yao was first approached about joining Tsinghua's faculty in 2003 by Chen Ning Yang, a Nobel Prize-winning physicist, who had himself recently begun lecturing at the university.

Through that and later discussions, Mr. Yao came to understand that the university's officials were more interested in hiring world-class talent than they were in building up specific areas.

"They want to catch up in a global way, and therefore it doesn't matter where they get started," Mr. Yao explains.

That hunger translates into money for leading Western-trained scientists willing to relocate. "China is a very exciting place for science and engineering for people who have vision," he says.

But while the chance to build a world-class institute from scratch required little consideration, how exactly to do it in a country with a developing higher-education system was a difficult question to answer.

Mr. Yao recruited his first class of graduate students, only to discover that many of them lacked basic skills. If he wanted quality applicants, he realized, he would have to train them himself. So he established an undergraduate program within the institute, selecting about 100 students each year and then identifying the most talented ones—a group now known as Yao's Class—for intensive instruction.

The fact that he had the freedom to do so reflects another element of China's higher-education strategy, in which a select number of elite universities are allowed to flourish.

"In the U.S., there are many things I would not be able to do," Mr. Yao says. "If you tell Princeton University, 'I would like to have an elite class of 20 students, and I will teach them in an accelerated way,' you can't do it."

But even recruitment strategies had to be adapted to Chinese realities. After realizing he would have trouble enticing high-caliber professors from abroad, Mr. Yao decided the computer-science institute would instead have a large postdoctoral program. Promising young scholars are now recruited from the international market and encouraged to interact with Tsinghua graduate students in what Mr. Yao calls a "big-brother system." This year, 11 fellows are serving as mentors for the institute's 30 graduate students and 120 undergraduates.

That solution is far from perfect. Fellows lack experience and typically do not stay in Beijing beyond the term of their fellowship, so Mr. Yao supplements the program with trips to meet leading scholars in Hong Kong, Australia, and Japan.

The trips abroad double as a reality check, important because Mr. Yao hopes to someday keep his homegrown talents on as professors. He wants his students "to make a decision rationally, and not because of their patriotism, to stay here for their graduate work," he says. "I don't want them thinking about greener pastures."

In his field, however, China's hunger to succeed means there aren't any.