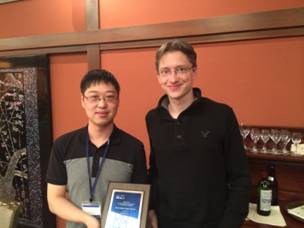 Yuezhou Lv and his advisor Prof. Thomas Moscibroda at DISC 2015

Social influence networks are a fundamental model used in network science to capture a wide range of dynamic processes and phenomena in social networks. Influence network models have been widely used in the study of diffusion of innovation, social networks, belief propagation, spring embedders, cellular automata, traffic networks, biological cell systems, etc. Yuezhou Lv, together with his supervisor, study how multi-hop information impacts convergence in social influence networks. Having such additional local information can be of critical importance both in terms of convergence speed as well as in terms of convergence ratio. The published paper studies different kinds of local decision algorithms and get properties on stability and conversion ratio. These results reveal a strict trade-off between stability and conversion ratio.

DISC 2015 PC chair Yoram Moses commented that the paper applied new techniques from distributed systems to a question that has received considerable attention in the economics and game theory literature during the rewarding ceremony. He also mentioned it as “an exciting paper that presents impressive characterization results, and opens new questions that are likely to lead to considerable follow-up work in our community.”

DISC is a leading academic conference in the field of distributed computing. This year, the conference has hosted about 126 researchers from all over the world, and accepted 42 full papers, no more than one-third of the total submission.