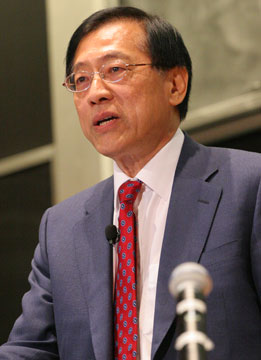 The development of the internet has not only changed the world technologically, but has also given rise to novel and exciting scientific inquiries. For example, the quest of finding trust and security in a networked environment necessitates the re-examination of what reliable knowledge is, and how it can be transferred from one party to another. In this talk we will discuss a modern theory of proofs that has been developed in recent years by theoretical computer scientists. Some of the stunning insights obtained may be compared with the most intriguing ones ever found in mathematic; moreover they are starting to be used in applications such as the secure verification of software downloads.

Professor Yao was born in Shanghai, China. He received a BS in PhysITCS from National Taiwan University , a PhD in PhysITCS from Harvard University , and a PhD in Computer Science from University of Illinois. His research interests include analysis of algorithms, computational complexity, cryptography and quantum computing. From 1975 onward, Professor Yao served on the faculty at MIT, Stanford, UC Berkeley, and during 1986 - 2004, as William and Edna Macaleer Professor of Engineering and Applied Science at Princeton University. In 2004, he left Princeton to become a Professor of Computer Science at Tsinghua Univeristy in Beijing . He is also a Distinguished Professor-at-Large at the Chinese University of Hong Kong .

Professor Yao was recipient of the prestigious A.M. Turing Award in year 2000 for his contributions to the theory of computation, including communication complexity, pseudorandom number generation, and quantum communication. He has received numerous other honors and awards, including the George Polya Prize, the Donald E. Knuth Prize, and several honorary degrees. He is a member of the US National Academy of Sciences, the American Academy of Arts and Sciences, and the Chinese Academy of Sciences.