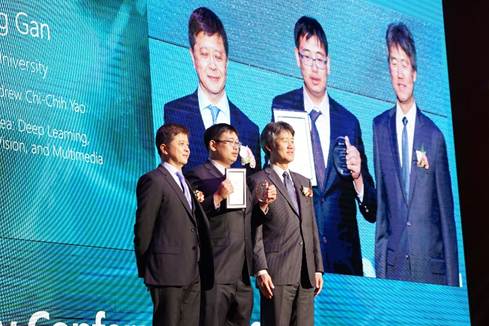 Chuang Gan, third on left, at the Award Ceremony .

MSRA Fellowships 2016 attracted almost a hundred PhD candidates from over 40 universities in the Asia-Pacific region, and only 10 of the most outstanding doctoral students were recognized as MSRA fellows, awarded with not only cash rewards of 10,000 USD but also the opportunity of 3-month academic visiting.

Chuang Gan, supervised by Prof. Andrew Chi-Chih Yao, Turing Award winner 2000, has made significant contributions to large scale video concept learning and event analysis, and has explored and advanced many important topics in that area. He is also the 5th PhD candidate from IIIS winning this award, with the others Pinyan Lu (2008), Jialin Zhang (2008), Xiaohui Bei (2011) and Chong Zu (2012).