The interview of 2017 Tsinghua Top Talent Scholarship for Undergraduate took place at Lecture Hall in the Main Building, Tsinghua University, Nov. 7, 2017. 16 shortlisted candidates who have achieved great advances in their respective fields attended the interview. Mingda Qiao, with 9 undergraduates from other departments, was awarded this year’s scholarship, making him the 5th prize-winning YaoClass student on this stage. 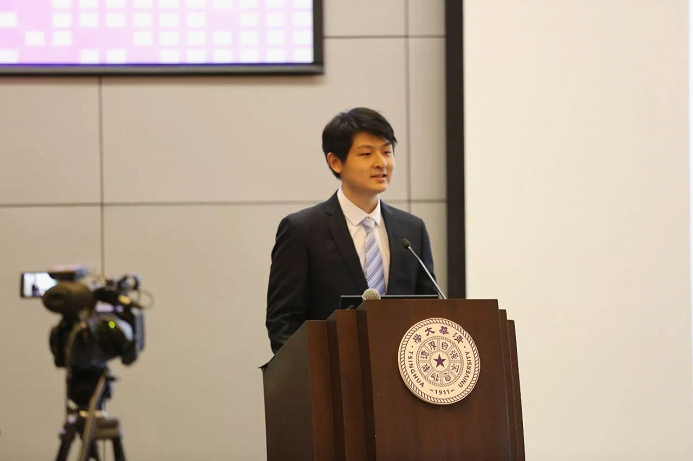 “I’m Mingda Qiao from IIIS, and I devote to world development with theory of machine learning”, Mingda greeted the audience with his ambition. He and his team members won the gold medal in ACM-ICPC World Final 2015, the only one of Tsinghua University in the recent 6 years.

Ranking top one of the class in three years, Mingda committed to discipline basis, which he believed essential to become a qualified academic researcher.

Mingda challenged the unsolved classic problem on machine learning theory proposed in 1954, and eventually made breakthrough in its solution. After conducting joint research on machine learning theory at Tsinghua University, Carnegie Mellon University and Stanford University, Mingda, as the main contributor, published 5 papers at international conferences including 2 at COLT17. Prof. Ariel Procaccia, supervisor of Mingda at CMU, commended “Mingda is absolutely phenomenal, and I believe he will be one of the top 5 CS PhD applicants worldwide this year.”

Tsinghua Top Talent Scholarship, established in 1989, is recognized as the most prestigious honor for Tsinghua undergraduates. Since 2005, 7 YaoClass students have been included in the candidate list and 5 of them, including Rong Ge (2007), Zhihao Jia (2012), and Jiajun Wu(2013), Lijie Chen(2016) and Mingda Qiao(2017), have received the prize.