Chuang Gan, IIIS PhD candidate, was recognized 2017 Tsinghua Top Talent Scholarship for graduates in the newly unveiled list with nine other graduates. It was the first time for IIIS to have winners of this prize for both undergraduates and graduates, 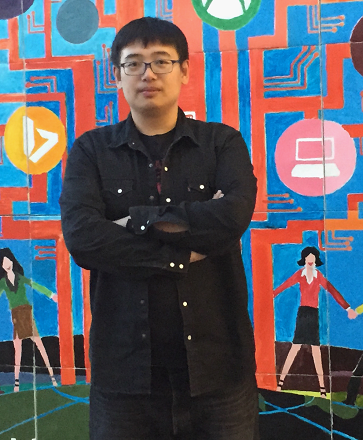 World champion of Video recognition of ActivityNet 2017, winner of Microsoft Research Asia Fellowship 2016 and Baidu Scholarships 2016, Chuang wins several important academic awards. No cross, no crown. Chuang spent at least 80 hours on scientific research every week over his 4-year PhD candidate life, but only one Spring Holiday with his family members. “My luckiest part is,” said Chuang, “that I found my search field and I love digging into deep learning and multimedia”.

Chuang published 14 papers at world’s top conferences and journals, including 1 at IJCV, 5 at CVPR, 3 at ICCV and 1 at ECCV. With outstanding research achievements, Chuang has served as a committee member and reviewer for many top-level periodicals and conferences in the field of computer-based artificial intelligence and computer vision (such as TPAMI / CVPR / ICCV / ECCV).

Chuang always believed that the purpose of scientific research should be to solve practical problems and change people's lives. With this goal, he focused on developing the world's best systems on video understanding. The video analytics system that he participated in was named the top three in international competitions for many times, including Championship of Video recognition of ActivityNet 2017. His scientific research is currently being used in products from Microsoft and Baidu, benefiting millions of users around the world.