Prof. Kihwan Kim’s trapped ion group at Center of Quantum Information of Institute for Interdisciplinary Information Sciences realized a quantum simulation of molecular vibronic spectroscopy in a trapped ion system. The work was published in Chemical Science on Jan. 28th, 2018, which is entitled as “Quantum Optical Emulation of Molecular Vibronic Spectroscopy Using a Trapped-ion Device.” 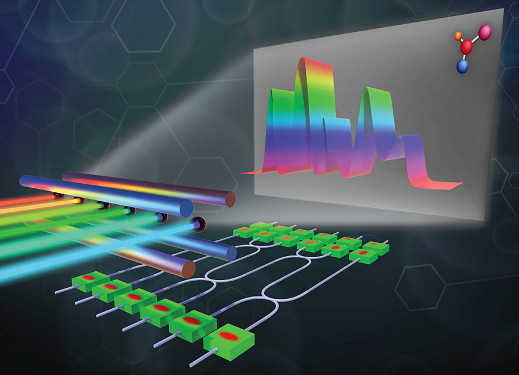 With the rapid development in the field of quantum computation, the number of qubits and the fidelity of quantum operations have been greatly improved. It is expected that in near future a quantum computer would demonstrate a better performance for a certain problem that is intractable in classical computers. Boson sampling is one of the well-defined problems that can show the outperformance of the quantum computer. Though the power of quantum computer can be revealed through boson sampling, it appears as a somewhat artificial problem that may not be related to a profitable problem. Recently, it was pointed that with modification, the boson sampling problem can be connected to the molecular vibronic (vibrational+electronic) spectroscopy.

In this work, inspired by the proposed theory, Professor Kim's group provides the experimental evidence that the sampling of the molecular vibronic spectrum can be done for the first time. Moreover, it was demonstrated with phonons in a trapped-ion system, not photons in photonic systems, which already have been attempted by many other groups. In order to perform a reliable sampling with phonons, they have developed the essential experimental technology for the phase-coherent manipulation of displacement, squeezing, and rotation with multiple motional modes in a single realization. They also develop the collective projection measurement on two phonon modes up to 10 phonons per mode. Finally, as an example, they obtain the photoelectron spectrum of sulfur dioxide (SO2) and observe the results are consistent within the experimental error bars. Their demonstration is believed to pave way to perform the molecular sampling beyond the limit of classical computation.

Fig.2 The experimental results of simulated SO2 vibronic spectroscopy

The full paper is available at：http://pubs.rsc.org/en/content/articlelanding/2018/sc/c7sc04602b#!divAbstract