A world-wide collaboration of researchers from 30 institutes, including Prof. Xiongfeng Ma’s group at Tsinghua University, have realized BIG Bell Test with the help of human freewill, as a potential solution to the randomness loophole. The work was published online in Nature on May 9. 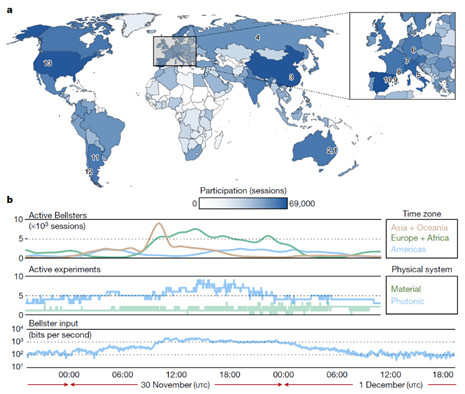 Geography and timing of the BBT

A Bell test is a randomized trial that compares experimental observations against the philosophical worldview of local realism, in which the properties of the physical world are independent of our observation of them and no signal travels faster than light. A Bell test requires spatially distributed entanglement, fast and high-efficiency detection and unpredictable measurement settings. In the past two decades, Bell test has been realized in varieties of experiments with certain potential loopholes unclosed. A famous loophole concerns the randomness of inputs. Without the existence of unconditional randomness, Bell test cannot be validated as local hidden variable models can simulate quantum theory with predetermined inputs.

Prof. Xiongfeng Ma’s research group have proposed one of the thirteen Bell tests in theory. On the conditional premise that human will is free, there are physical events (the measurement outcomes in the Bell tests) that are intrinsically random. By using such randomness, the loopholes can be closed in some degree in the Bell tests.

On November 30th, 2016, the BIG Bell Test asked human volunteers, known as Bellsters, via Internet, to choose the measurement inputs, which are further distributed to 13 labs around the world. The experiment result proved that, as long as one believes that the human random inputs cannot be controlled at a certain level, the Bell inequalities violations cannot be explained by the local hidden variable models. It is believed that the research would pave the way for the quantum nonlocality test in the Earth-Moon system.

The authors also include the former PhD student Xiao Yuan at Xiongfeng Ma’ Group at Tsinghua. This work is supported by the National Natural Science Foundation of China.