Simulation of quantum Rabi model in a trapped ion system

The ion-trap quantum computation research group led by Professor Kihwan Kim in the Center for Quantum Information, Institute for Interdisciplinary Information (IIIS), Tsinghua University, has recently successfully simulated the quantum Rabi model (QRM) in a trapped ion system. The work “Quantum Simulation of the Quantum Rabi Model in a Trapped Ion” was published on April 30 in the Physic Review X.

Quantum simulation could be one of the most promising applications with a coherently controlled quantum system like a quantum computer. There have been many successful demonstration of quantum simulations with cold atoms or trapped ions. However, most of them are limited to the simulation of spin-degrees of freedom, such as Ising spin models. In this work, Prof. Kihwan Kim’s group perform the quantum simulation for both spin and bosonic degree of freedom for the first time. The simulated Quantum Rabi Model (QRM) is one of the most fundamental models describing light-matter interaction.

Recently, there have been increasing interests in studying the QRM when the coupling strength between matter and light approaches or becomes larger than the frequency of light itself, so called ultra-strong coupling or deep strong coupling regimes. When the coupling strength is much smaller compared to that of the bosonic field mode frequency, it can reduce to the Jaynes Cummings model (JCM), which simply describes the phenomena of absorption or emission of a photon associated with the excitation or decay of a spin-state. When the coupling strength is increased, the ground state of the QRM Hamiltonian reveals an entanglement between the spin and photons as shown in Fig. 1. The exotic ground state of the QRM Hamiltonian is theoretically expected, but it has not been observed experimentally.

In their work, Prof. Kihwan Kim’s group employ a single 171Yb+ ion trapped in a harmonic potential created by an oscillating electric field and implant the QRM Hamiltonian on the 171Yb+ ion system by applying the properly turned Raman laser beams. The Hamiltonian exists in a proper rotating frame related to the laser frequencies. In such effective Hamiltonian, they can arbitrarily control the ratio between the coupling strength and the mode frequency by simply adjusting the laser frequencies. The controllability of our trapped ion simulator enables us to experimentally explore the QRM, including a wide range of otherwise inaccessible phenomena, such as those happening in the ultra-strong and deep strong-coupling regimes. For instance, they experimentally observe the breakdown of the rotating-wave approximation and the phonon wave packets that bounce back and forth. Most importantly, they adiabatically prepare the ground state of the QRM in the deep strong coupling regime, where we detect the nontrivial entanglement between the bosonic field mode and the two-level system. 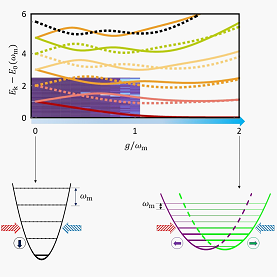 Figure 2 The energy spectrum of quantum Rabi model.In the experimental, we adiabatically prepare the ground state in the ultra-strong coupling regime, and measure the corresponding energy spectrum through the coherent driving.

This experiment was completed by Dr. Dingshun Lv, Dr. Shuoming An and Dr. Zhenyu Liu, who are the Ph.D. students in the IIIS. The assistant researcher Jingning Zhang in the IIIS, Dr. Julen S. Pedernales, Prof. Lucas Lamata and Prof. Enrique Solano from the University of the Basque Country provided theoretical support for this experiment. The first author of this work is Dr. Dingshun Lv, a Ph.D. student in the IIIS. The corresponding authors of the paper are Jingning Zhang and Kihwan Kim. This work was supported by the National Key Research and Development Program of China and the National Natural Science Foundation of China.

The link for the article is as follows.