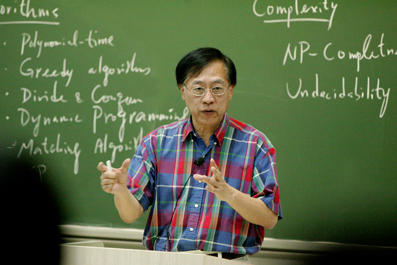 It was for Tsinghua University Professor Andrew Chi-chih Yao just a routine Thursday schedule. First he gave a lesson in the morning to the Pilot Computer Science class. With two foreign scholars, he conducted a seminar at 2:00 that afternoon for graduate students. Afterward, Professor Yao exchanged ideas with the visiting Minister of Education and the Minister of Technology, on the development of world-class disciplines in China’s universities. By late that afternoon, Professor Yao was ready to turn to his own research. It was just a very common day for Tsinghua University’s Professor Yao.
Professor Yao is a world-renowned computer scientist. He received the prestigious A.M. Turing Award in 2000 for his “fundamental contributions to the theory of computation, including the complexity-based theory of pseudorandom number generation, cryptography, and communication complexity.” He has been on the faculty at such universities as MIT, Stanford, UC Berkeley, and Princeton. He left Princeton in 2004 to become a Tsinghua University Professor of Computer Science.
Professor Yao had a life changing experience when he met Chinese Computer Science scholars in 2002 at an academic meeting in Shanghai. Some Tsinghua graduate students happened to attend his lectures in Shanghai. He made a very big impact on them. The following year, Professor Yao accepted an invitation from Tsinghua University to help build the Chair Professor Group of the Department of Computer Science and Technology. In 2004, Yao formally joined Tsinghua University’s Center for Advanced Studies as Full Professor. “Both Tsinghua University and China’s government place a high priority on building world-class Chinese universities. From this perspective, it’s worthwhile for me to make a contribution to this effort,” said Professor Yao.
Professor Yao’s appearance fills a major gap in theoretical computer science research in China. He has brought to Tsinghua a Chair Professor Group composed of ten outstanding Chinese scholars in computer algorithms and complexity theory from world-renowned universities. Now Tsinghua’s Department of Computer Science and Technology for the first time has excellent world class scholars in all four fields of computer science--theory, application, system structure and software. From 2003 to 2006, besides supervising Ph. D students, each member of the Chair Professor Group is in residence at Tsinghua for one to two months every year to give courses and lectures. One member of the Group is Professor Jiang Tao from the University of California. He gave a one year course in Advanced Algorithms at Tsinghua. Later he was appointed in 2006 China’s Ministry of Education Changjiang Lecturer.
Meanwhile, Professor Yao established the Institute for Theoretical Computer Science at Tsinghua University in 2006. Since then, the Institute has welcomed many foreign scholars, including world-renowned scholar Avi Wigderson from Princeton’s Institute for Advanced Studies, Turing Award Winner Richard Karp, and Turing Award Winner and renowned cryptology expert Adi Shamir. The Institute also accepts visiting foreign students from such universities as MIT and UC Berkeley. Professor Yao’s Ph. D students at Tsinghua also have the chance to study abroad for at least one semester.
Through the efforts of Professor Yao and his colleagues, three theses from the Department of Computer Science and Technology were selected for inclusion by the Symposium on Foundations of Computer Science (FOCS) in 2006. The same year, Chen Xi, a Tsinghua Ph. D student, and Chair Professor Deng Xiaotie won best FOCS 2006 theses for their studies on settling the complexity of 2-player Nash-equilibrium.
As a result of Professor Yao’s efforts to build a world class presence computer science, Tsinghua now is able to attract leading students, scholars, and conferences in core computer science specialties. The 10th International Conference on Theory and Practice of Public Key Cryptography (PKC), for example, was held at Tsinghua from April 17 to 19, 2007. More than 100 cryptology experts from China and abroad participated in the three-day meeting. It was the first time the annual Conference was held in China.
Professor Yao has also made strategic steps to strengthen Tsinghua’s computer science and technology undergraduate education. As a result of discussions with Shen Xiangyang, President of Microsoft Research Asia, Professor Yao established the undergraduate Pilot CS class in 2006. “We will cultivate world-level talents in computer science instead of mere programmers,” Yao emphatically said. The Pilot CS class has eight core courses. The Pilot classes are given jointly by Professor Yao, renowned Tsinghua Professors, and advanced researchers from Microsoft Research Asia. Professor Yao’s theoretical courses help strengthen the students’ knowledge in computer theory. It is the first time for a Chinese university to offer such courses. 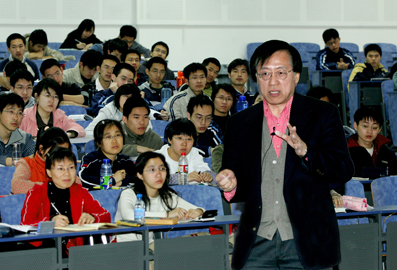 All of the courses of the Pilot class are taught in English. Professor Yao is strict with his students. He asks them to write exercises using LaTex, a software package especially designed for writing papers. The Pilot class students later demonstrate their talents and excellence. Among former students from the Pilot class are the Chairman of the Science Association of Tsinghua’s Department of Computer Science and Technology, a Gold Medal winner of the Association for Computing Machinery International Collegiate Programming Contest, and several “experts” in Game Interface Design.
Professor Yao places great emphasis on developing the students’ practical skills. According to his plan, the Pilot class students have their whole fourth year for research and practical training in world-famous IT companies such as Microsoft. Yao also plans to send top students from the class for short-term exchange and study in the top five U. S. universities.

Professor Andrew Chih-Chih Yao is making a herculean effort to move China’s efforts in computer science and technology toward world class standards. “If we follow the right path, Tsinghua’s efforts in computer science will lead to great scientific breakthroughs in the coming several years. And if we continue to make a strong effort, Tsinghua University’s Computer Science curriculum will become a world-class discipline in the future,” Professor Yao confidently concludes.