Professor Kihwan Kim’s group in the Center of Quantum Information (CQI), Institute of Interdisciplinary Information (IIIS), Tsinghua University, has recently proposed and successfully demonstrated powerful more than two-qubit quantum gate operations in a trapped ion system. The work “Quantum Simulation of the Quantum Rabi Model in a Trapped Ion” was published on July 24 in Nature. The corresponding authors of the paper are Yao Lu, PhD candidate of IIIS, andProf.Kihwan Kim, associate professor of IIIS. The equally contributed first authors of the work are Yao Lu, Shuaining Zhang and Kuan Zhang, Ph.D. candidates of IIIS.

In this letter, prof. Kim’s group reported the realization of scalable, more than two-qubit gates in a trapped ion system. Trapped ion system is one of the strong leading candidates for the implementation of practical quantum computers. Recently a blue-print of a trapped ion system scalable up to a few dozens of qubits in a single trap has been proposed and a small programmable quantum computer has been realized following the blue-print. Until now, all the operations in such scalable trapped ion system are based on single qubit and two-qubit gates. The research grouped develop the novel scheme of more than two-qubit gates and experimentally demonstrate the global gates up to 4-qubits as an example. They benchmarked the performance of the operation by observing the fidelity of Bell-state, which is significantly larger than classical bounds. 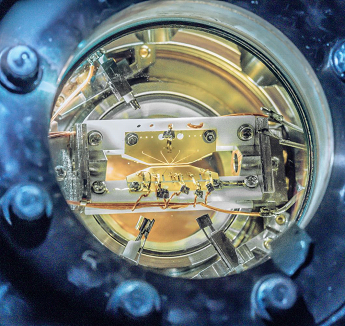 This experiment was completed by Yao Lu, Shuaining Zhang, and Dr. Wentao Chen, Yangchao Shen, and Jialiang Zhang supported the experiment. Jingning Zhang, Assistant Researcher of IIIS, provided theoretical support for this experiment. This work was supported by the National Key Research and Development Program of China under Grants No. 2016YFA0301900 and No. 2016YFA0301901 and the National Natural Science Foundation of China Grants No. 11574002, and No. 11504197, the National Natural Science Foundation of China.