Rice University President David Leebron called for a "joint conversation" on ways to eliminate unnecessary barriers to international research during an April 27 workshop titled "Science Collaborations Across Borders" at the Baker Institute for Public Policy. 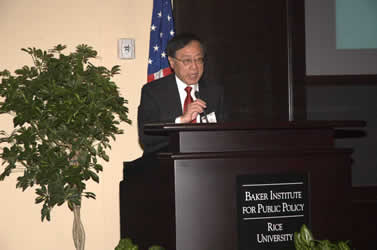 Leebron cited the example of the 19th-century revolution in chemistry, which was nurtured by the free flow of ideas between universities and laboratories throughout Europe. Today, he said, visa requirements that unduly burden the movement of researchers and exchange of ideas, or excessive requirements around technologies that might have military applications, should not be allowed to interfere with the international collaborations that could lead to important and beneficial scientific advances.

Leebron also introduced the other panelists, who described the impediments to international scientific collaboration and offered suggestions on how to deal with them. C.W. "Paul" Chu, a professor at the University of Houston and president of the Hong Kong University of Science and Technology, called scientific collaboration "inevitable -- not an option but a necessity."

While scientists are always collaborating and sharing ideas, Chu said, they are also competing with one another. Research institutions will seek any competitive advantage that circumstances provide. After the United States curbed the entry of international students and scholars following the Sept. 11 attacks, applications to his institution rose dramatically, Chu said. And Hong Kong is uniquely positioned to act as a bridge for scientific cooperation, he added, because of its geographic location, its linguistic heritage and its traditional openness.

Michael M.C. Lai, president of Taiwan's National Cheng Kung University, echoed Chu's views on the importance of international competitiveness. Research institutions must communicate internationally, appreciate other cultures and conform to international standards to attract the best talent, Lai said. He pointed to a number of challenges to productive collaboration, including funding issues, travel restrictions, difficulties in arranging housing for visiting scientists and identifying researchers willing to travel. He called for greater incentives to overcome these obstacles, especially new ways to motivate young scientists to spend time in other countries.

Addressing Lai's concerns, Meng Hwa Er, senior associate provost at Singapore's Nanyang Technological University, said his institution has a policy of encouraging all its students to take part in international exchanges. It is part of Singapore's efforts to attract what he called "the best and the brightest" minds in science. Despite the worldwide economic crisis, Er said, the small nation state "continues to push to become a research powerhouse." He highlighted the Research, Innovation and Enterprise Council, chaired by Singapore's prime minister, as an example of its efforts to transform Singapore into a knowledge-based economy, with a focus on research and development.

Leebron noted Rice's dramatic rise in international students -- from 3 percent to 12 percent of the entering undergraduate class -- and asked the panelists how such efforts to internationalize universities should be balanced between top-down or bottom-up endeavors. Lai said universities must provide incentives that facilitate collaboration, while Chu urged individual professors to take the initiative. Responding to a question from the audience about how universities should measure their internationalization success, Leebron said that while it is easy to measure student travel exchanges and perhaps the number of partner institutions, it is more important to define success by how well universities establish structures that survive individual collaborations. He suggested developing "meta-relationships," like strong department-to-department links that will move beyond the personal to the institutional.

Chi-Chih “Andrew” Yao discussed how to use China's advantages to nurture scientific talent. He is a professor at the Center for Advanced Study and director of the Institute for Theoretical Computer Science, both at Tsinghua University, and distinguished professor at large at the Chinese University of Hong Kong.

Yao described his goal of designing a theoretical computer science "superhighway" for education and research, which would attract the best students in the country. Moreover, he said, China aspires to develop an efficient system that would draw overseas Chinese into its high-tech plans. The long-term ambition, he said, is to make global scientific collaboration more symmetrical by transforming China into a destination for international researchers from all parts of the world.

The Baker Institute's Science and Technology Policy Program organized the workshop, with assistance from the institute's Transnational China Project and the Technology, Society and Public Policy Program. Support was provided by the Richard Lounsberry Foundation.