On July 6th, the first China Postdoctoral Innovation Forum was held at Tsinghua University. Mr. Andrew Chi-Chih Yao, director of the Institute for Theoretical Computer Science in Tsinghua University and one of Turing Award winners, gave a keynote speech entitled Computer Science in China at the forum as an invited guest. The speech won the appreciation and recognition of more than 170 people present, including postdocs, co-operation supervisors, administrative staff and government officials, etc. 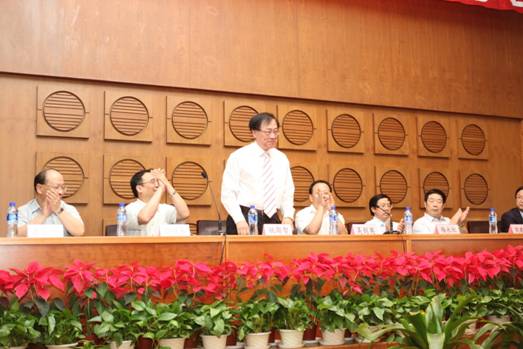 It was more an interpretation and guideline than a speech for the establishment of a first-rate university and the construction of an innovation-oriented country. The speech could be divided into four parts:

At first, Mr. Yao took computer science as an example and pointed out that China's computer science had made great progress for the past 30 years and had rapidly shortened the gap with top universities in the world in respect to the number of high-level papers published. However, influential papers which could contribute a lot to the academic world were not enough, and it could be concluded that in the next ten years or so, China would be still short of valuable hi-tech knowledge. Considering this, how could Chinese universities become world-top universities? Mr. Yao gave his insightful opinions:

In the past, many people believed that traditional Chinese culture had a negative influence on the innovative mind of scientists, which was not convincing. On the contrary, China had already had the advantages in building first-rate universities:

Secondly, there are a lot of excellent Chinese scientists, including overseas Chinese scholars, which ensures rich human resources.

As long as we made full use of these advantages, China had full capacity to build first-rate universities, Mr. Yao said firmly.

Then, taking a well-known case Caesar Password in Modern Cryptography as an example, Mr. Yao had discussed how to think outside of the box and create new intellectual property rights, in order to explain the meaning of scientific innovation. The interesting case study won thunderous applauses from the audience. 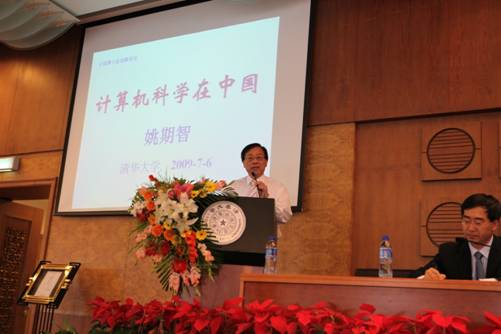 As to the question how young scientists could be more creative, Mr. Yao told us from his more than 30 years' experience: firstly, we should have a positive mind; secondly, we should seek truth from facts with a prudent attitude, set up long-term goals and conform to international standards; thirdly, we should pay attention to cultivate good personal research environment and social research atmosphere.

Then, Mr. Yao introduced the efforts the Institute for Theoretical Computer Science had made in the process of building a first-rate university. At present, ITCS was preparing for China Computer Science Vision 2020 in October 2009 and Innovations in Computer Science 2010 in January 2010. High level international conferences were golden opportunities for young computer science scholars to exchange ideas. In addition, ITCS is going to build a co-operation platform in computer science between MIT and Tsinghua University. 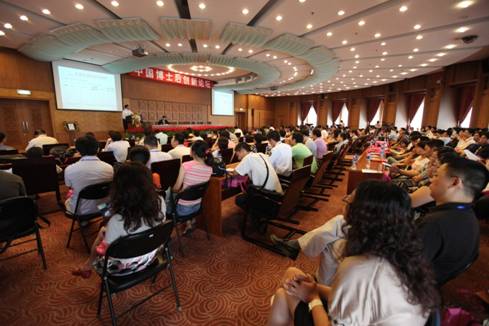 Finally, Mr. Yao emphasized that innovation was not to follow the way the western countries led, but to reach our goals ahead of them. As a matter of fact, Chinese universities still had a long way to go in order to be able to compete with top universities in the world. But this is not a bad thing. Instead, the young professors and postdocs will devote themselves into scientific researches, and build first-rate universities with more Chinese characteristics, in hopes of moving forward to the construction of a powerful innovation-oriented country.