On 26th, August, 2009, with Tsinghua new freshmen,s registration, CS Special Pilot Class of Tsinghua University made its second recruitment. CS Special Pilot Class was established by Andrew Chi-Chil Yao, world famous computer scientist, winner of Turning Award and it has always been short-named " Yao Class ". The recruitment included on-site application during the day and a public talk in the evening on 26th, a written test on the morning of 27th, interview on 28th, and the result announced on 29th.

In the early morning of 26th, led by Professor Wang Yuexuan, associate director of ITCS, the staff began with the preparation, ready to welcome the freshmen who came for consulting. 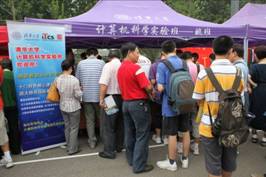 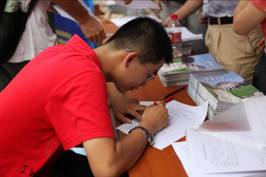 Every year, the recruitment of Yao Class attracts special attention from freshmen and their parents and it is no exception this year. Many students were attracted here by its reputation, at the very beginning of the recruitment. We read from their confident but urgent impression, that what they concerned about was not only the recruitment standards, but their expectation to be one of Yao Class. At 10 a.m., the booth was crowded with parents and students interested, and some of them were queuing in long lines. Prof. Yuexuan Wang and Prof. Xiaoming Sun also came and answered the questions from students and parents in great patience. Yao Class received consultation and applications from students of all departments, even some parents whose children were from the School of Journalism and Communication, also hoped their children can be admitted into Yao Class. To them, being a member of Yao Class is of great importance on the way to success for their children. There were also some parents getting the brochure in the morning and after reading and consideration, coming back to turn in the application form listed with all kinds of prizes and awards. Up to the afternoon on 26th, over 160 application forms were received.

After the on-site application, at 7pm on Aug. 26, a public talk on Yao Class was given in the Lecture Hall of FIT building, which was full of students and parents. The video on ITCS played on the two screens on both side of the platform excited every audience present. Prof. Yuexuan Wang, associate director and teacher of Yao Class, started the talk with a vivid introduction on Yao Class, which answered the most concerned questions by students and parents. She first told the audience about the difference between Yao Class and other computer science class, which was that Yao class paid greater attention to the theoretical foundation of computer. Professor Andrew Chih-Chi Yao,s education model and its achievement had been recognized by world famous universities in computer and also been fully supported by the government departments. Second, she introduced the educational characteristics of Yao Class, namely, classes given by famous professors and frequent international exchanges, which are rare even in world famous computer universities like MIT and Princeton University for their undergraduate students. Last, good study environment and world-level faculties enable our students to have scientists, vision at an early stage. 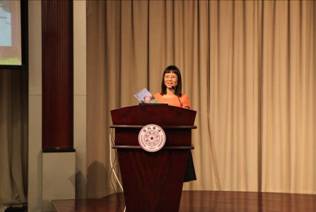 Then two foreign post-doctoral teachers from Yao Class,Anke and Frans (who are from Holland, doctors of Cornell University ) were also invited to give a speech. Just like in a regular class, the two teachers introduced Prof. Yao, the objectives of Yao Class, the international faculty, the courses of Yao class, international conferences, visits and exchanges, prizes of Yao class, etc. to the audience, which gave the students and parents a direct impression of Yao class. Their humorous speeches and active interaction with the audience made the whole talk a big success. It was just like in a class, the students follow the teachers' thoughts and gained knowledge in an inspiring environment. 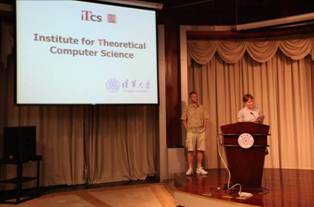 The last presentation is made by Xiaoming Sun, associate research fellow, teacher of Yao class. He introduced the training programme and teaching plan of Yao class in the following four years. There were no boasting promises or cliches in his speech, but the simplest cases in mathematics and computer in our daily life, through which he introduced the detailed information about training programme of Yao class, ten special courses of Yao class, international exchanges for junior students, and the social practice for senior students. 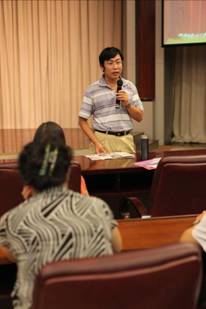 After the four teachers' all-round introduction and active interactions, all the doubts and questions got satisfying answers. Everyone was attracted by the first- rate professor team and advanced training methods of Yao class, although they all know that to be a member of Yao class required both talent and efforts. More application forms were submitted after the talk. 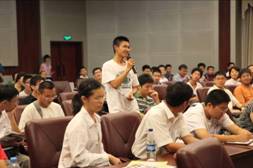 (A Student was asking questions at the talk.)

On the morning of 27th, August, More than 150 students took the exam at Room 101, 104 of Teaching Building No. 1. All together 150 students attended this examination. After over ten years, hard work, they realized their dream of studying in Tsinghua, but just at this time, they were all serious about the exam and were eager to be selected to Yao class through this exam. The examination focused on mathematic fundamentals, including their skills in mathematics and logic thinking. The grading lasted late at night. At last, 35 outstanding students appeared in the interview list.

On 28th, August, interviews took place in Room 1-222, FIT Building. The students, solid math foundation, comprehensive knowledge, and rich experience in competitions won the teachers' appreciation. The final admission list was put out by the admission office of Tsinghua university. 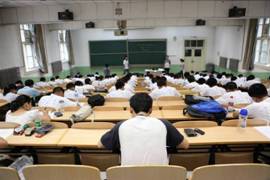 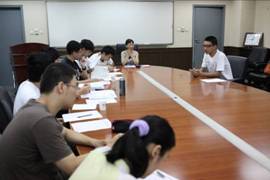 The second recruitment of Yao class came to an end. Yao class sincerely welcomed the 30 students who had been through several rounds of selections and finally joined the class. We hope that all the students follow Tsinghua motto--"Self-discipline and Social Commitment", and strive for the future of China's computer science.