Prof. DUAN Luming has been appointed to be the first Tsinghua Fundamental Science Chair Professor, President QIU Yong announced at a ceremony on April 24, where Chair Professorship and tenure were granted. 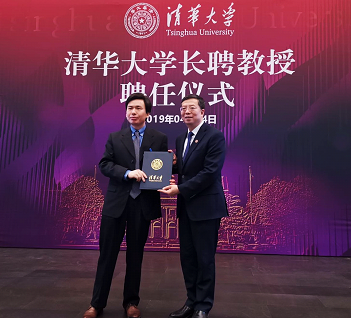 In his address, President QIU Yong extended his congratulations to the newly-appointed professors and expressed his appreciation to those who provided their support towards the talent plan of Tsinghua University. He said, on the occasion of Tsinghua 108th anniversary, the appointments marked the new progress of faculty reform. Tsinghua University has established Chair professorship in Humanities and Fundamental Science, and Prof. Duan was named as the first Fundamental Science Chair Professor to recognize his outstanding contributions and the leading role he played in his field.

Before joining the faculty of Institute for Interdisciplinary Information Sciences (IIIS) at Tsinghua full time in 2018, Prof. DUAN Luming was the Enrico Fermi Collegiate Professor at the University of Michigan (Ann Arbor). He has received numerous honors, including the A. P. Sloan fellowship, and the outstanding young researcher award from the Oversea Chinese Physics Association. Prof. Duan made pioneering work in implementation of quantum networks and quantum computation, including the renowned DLCZ（Duan-Lukin-Cirac-Zoller) scheme for realization of long-distance quantum communication through quantum repeaters and the network approach to scalable quantum computation. Prof. Duan have published more than 160 papers in top physics journals with more than 24,600 total citations.

By the invitation of Prof. Andrew Chi-Chih Yao, winner of the A.M. Turing Award, who founded the Center for Quantum Information (CQI) at Tsinghua University, Prof. Duan joined the efforts at Tsinghua CQI through holding the CC Yao honorary Professorship since 2011. He helped to lead the CQI to become a world renowned center for research in quantum information over the last few years with a number of impressive achievements, including the experimental realization of all-geometric quantum computation in a room-temperature solid-state system; the experimental realization of quantum memory with 225 individually accessible memory cells; the experimental entanglement of 25 individually accessible atomic quantum interfaces; and the discovery of a quantum generative model for machine learning with exponential advantage in representational power and learning speed.