Recently, Prof. Kihwan Kim's research group at the Center for Quantum Information (CQI) of Tsinghua University has made important progress in the field of quantum computing. More than one hour coherence time of a single qubit is achieved, which breaks the previous world record. The paper entitled 'Single ion qubit with estimated coherence time exceeding one hour' was recently published in Nature Communication.

Previously, the longest coherent time recorded for a single ion qubit was 660 s, which was also made in Kihwan Kim's research group. However, it was not clear what prohibited further enhancement. This work identifies and suppresses the limiting factors, which are the remaining magnetic-field fluctuations, frequency instability, and leakage of the microwave reference-oscillator. And observe a coherence time of around 5500 s. To suppresses these factors, the experimental setup is placed in a two-layer magnetic field shielding system to reduce the coupling between the ambient magnetic field noise and the qubit system. The laser and microwave signal leakage are reduced by increasing signal isolation. And the microwave frequency instability is reduced by improving the reference of the local oscillator. To further suppress the noise, the dynamic decoupling technology was adopted and the pulse parameters are optimized according to the lab's noise environment. The final quantum bit coherence time has an order of magnitude increase over the previous period. Besides, this work further analyzes and quantifies all the factors limiting the ion qubit coherence time, which lays a foundation for further improving the coherence time. 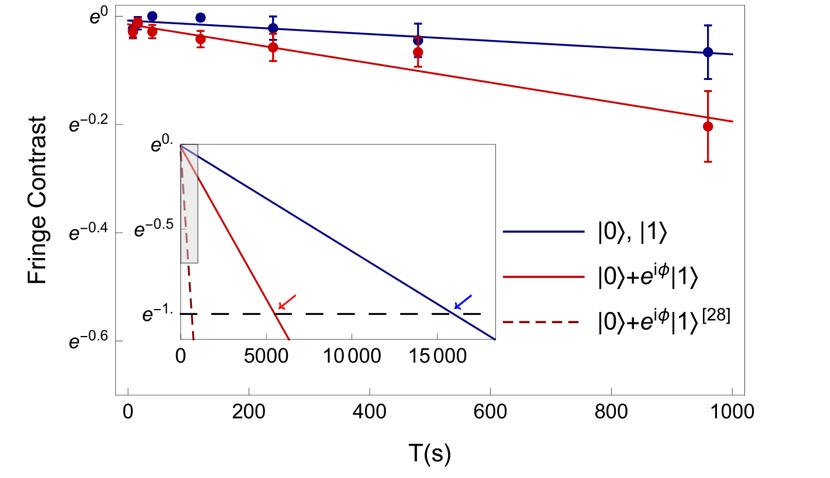 The measurement result of coherence time

The first author of this paper is Pengfei Wang, Ph.D. student of CQI, and the corresponding author is Prof. Kihwan Kim. Other authors include Ph.D. students of CQI: Chun-Yang Luan, Mu Qiao, and Mark Um, Junhua Zhang, assistant researcher at Southern University of Science and Technology; Ye Wang, postdoctoral fellow at Duke University; Xiao Yuan, assistant professor at Peking University; Mile Gu, professor at Nanyang Technological University in Singapore; and Jingning Zhang from Beijing Academy of Quantum Information Science. This work was supported by the National Key Research and Development Program of China under Grant Nos. 2016YFA0301900 and 2016YFA0301901, the National Natural Science Foundation of China Grant Nos. 11574002, 11974200, and 11504197.