On the morning of Nov.11, Beijing Forum for 2008 Nobel Laureates was opened at the Great Hall of the People. Seven Nobel Prize Winners and four Turing Award Winners attended this forum. International top scholars, from the field of physITCS, economITCS, biology, chemistry and information science, gave wonderful lectures on their latest research results.

In the academic forum after the opening ceremony, Prof. Andrew Chi-Chih Yao from Advance Study Centre in Tsinghua University gave a speech on The Science Behind Information Technology. Prof. Yao mentioned in his talk that computers, Internet and information technology have developed into the basis of all kinds of work and people’s daily life. Behind all the marvelous computing and communication hardware is modern information technology, which helps us design the operational rules to operate the equipment and usually develops into necessary conception for brand-new applications. 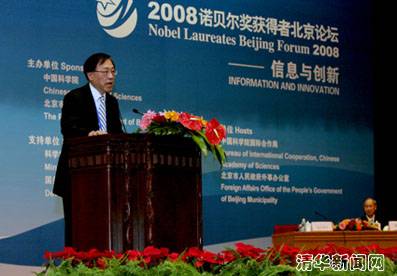 He claimed that information technology in the 21st century faces many major issues, such as Internet security, processing data of huge amount, great impact of information technology on physITCS, medical treatment, biology and economITCS and so on. The solution of these problems is urgently needed in the way of breakthrough in theory and creativity in technology.

This forum will last four days, and is held by Beijing Government and the Chinese Academy of Science. The forum takes “Harmony and Development” as the permanent theme and “information and innovation” as annual theme. “Information and Innovation Strategy Forum”, “Information and Innovation Academic Forum”, “Chinese Academy of Science Senior Academic Forum” and “Zhongguancun Forum” will be held during these four days, and distinguished guests will give more than 50 wonderful lectures. On the morning of Nov.12, Nobel Laureate in PhysITCS DAVID J. GROSS came to Tsinghua and gave a marvelous lecture on fundamental physITCS for faculty and students and was invited to be an Honorary Professor in Tsinghua University.

Beijing Forum for Nobel Laureates has already been held for three years and it has become the signal of “Academy in Beijing”. The difference between this forum and former three ones lies in hierarchy and variety. The host hopes to enhance youth’s and citizens’ interest in science through the interaction between Nobel Laureates and citizens. (Article by Yuexuan Wang, photos by Haijun Guo and edited by Kai Cui)