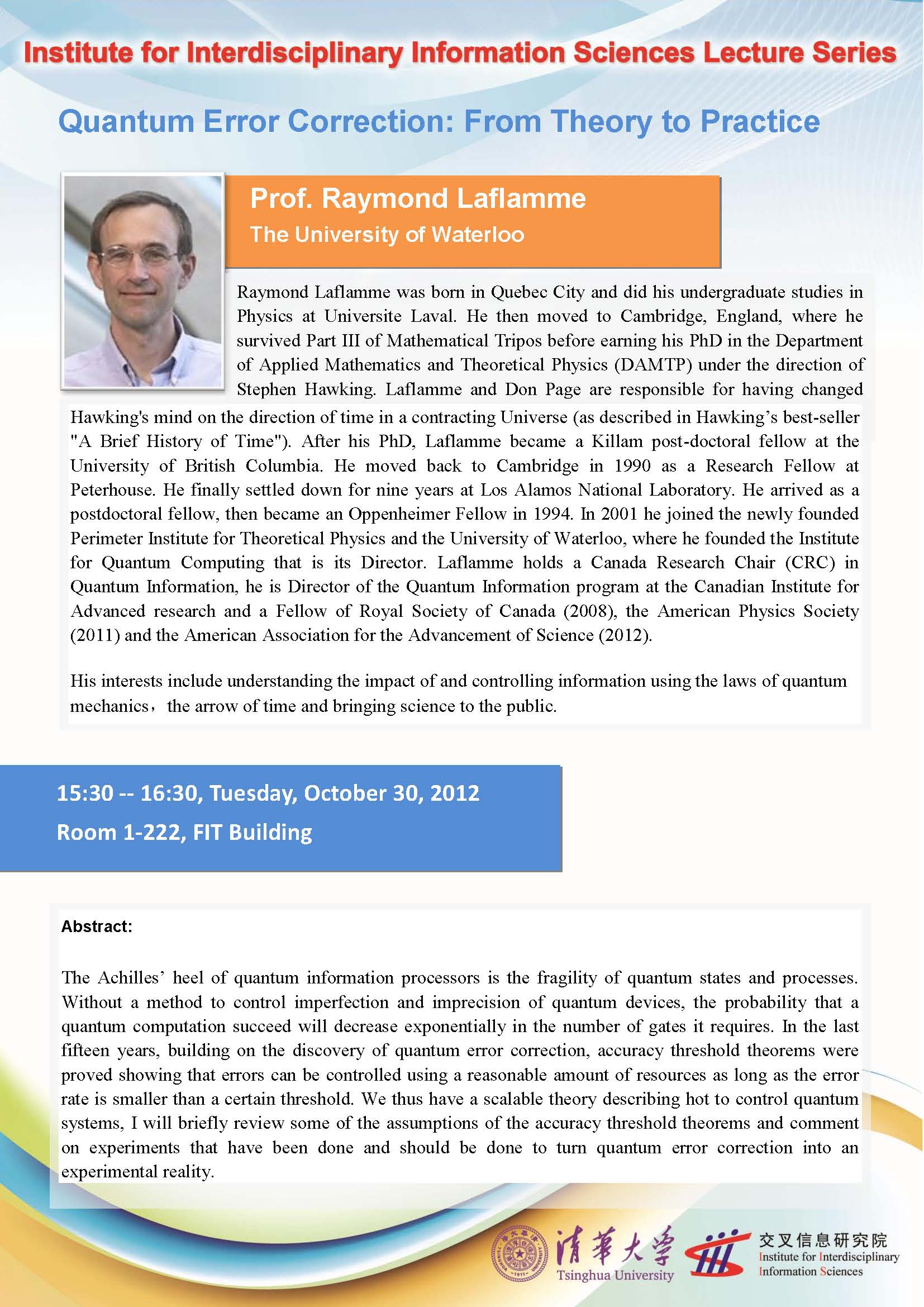 
The Achilles’ heel of quantum information processors is the fragility of quantum states and processes. Without a method to control imperfection and imprecision of quantum devices, the probability that a quantum computation succeed will decrease exponentially in the number of gates it requires. In the last fifteen years, building on the discovery of quantum error correction, accuracy threshold theorems were proved showing that errors can be controlled using a reasonable amount of resources as long as the error rate is smaller than a certain threshold. We thus have a scalable theory describing hot to control quantum systems, I will briefly review some of the assumptions of the accuracy threshold theorems and comment on experiments that have been done and should be done to turn quantum error correction into an experimental reality.


Raymond Laflamme was born in Quebec City and did his undergraduate studies in Physics at Universite Laval. He then moved to Cambridge, England, where he survived Part III of Mathematical Tripos before earning his PhD in the Department of Applied Mathematics and Theoretical Physics (DAMTP) under the direction of Stephen Hawking. Laflamme and Don Page are responsible for having changed Hawking's mind on the direction of time in a contracting Universe (as described in Hawking’s best-seller "A Brief History of Time"). After his PhD, Laflamme became a Killam post-doctoral fellow at the University of British Columbia. He moved back to Cambridge in 1990 as a Research Fellow at Peterhouse. He finally settled down for nine years at Los Alamos National Laboratory. He arrived as a postdoctoral fellow, then became an Oppenheimer Fellow in 1994. In 2001 he joined the newly founded Perimeter Institute for Theoretical Physics and the University of Waterloo, where he founded the Institute for Quantum Computing that is its Director. Laflamme holds a Canada Research Chair (CRC) in Quantum Information, he is Director of the Quantum Information program at the Canadian Institute for Advanced research and a Fellow of Royal Society of Canada (2008), the American Physics Society (2011) and the American Association for the Advancement of Science (2012).

His interests include understanding the impact of and controlling information using the laws of quantum mechanics，the arrow of time and bringing science to the public.