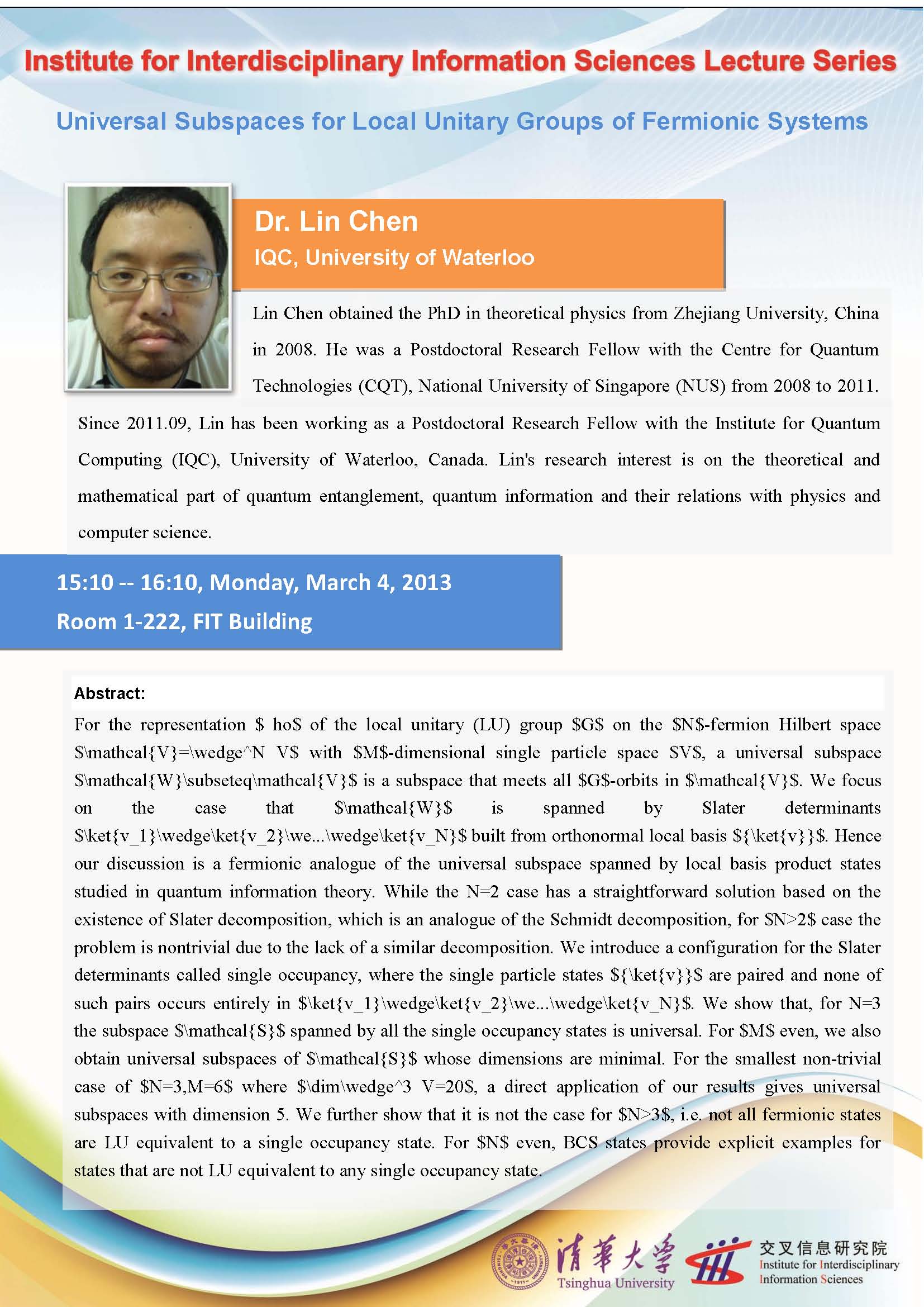 
For the representation $ ho$ of the local unitary (LU) group $G$ on the $N$-fermion Hilbert space $\mathcal{V}=\wedge^N V$ with $M$-dimensional single particle space $V$, a universal subspace $\mathcal{W}\subseteq\mathcal{V}$ is a subspace that meets all $G$-orbits in $\mathcal{V}$. We focus on the case that $\mathcal{W}$ is spanned by Slater determinants $\ket{v_1}\wedge\ket{v_2}\we...\wedge\ket{v_N}$ built from orthonormal local basis ${\ket{v}}$. Hence our discussion is a fermionic analogue of the universal subspace spanned by local basis product states studied in quantum information theory. While the N=2 case has a straightforward solution based on the existence of Slater decomposition, which is an analogue of the Schmidt decomposition, for $N>2$ case the problem is nontrivial due to the lack of a similar decomposition. We introduce a configuration for the Slater determinants called single occupancy, where the single particle states ${\ket{v}}$ are paired and none of such pairs occurs entirely in $\ket{v_1}\wedge\ket{v_2}\we...\wedge\ket{v_N}$. We show that, for N=3 the subspace $\mathcal{S}$ spanned by all the single occupancy states is universal. For $M$ even, we also obtain universal subspaces of $\mathcal{S}$ whose dimensions are minimal. For the smallest non-trivial case of $N=3,M=6$ where $\dim\wedge^3 V=20$, a direct application of our results gives universal subspaces with dimension 5. We further show that it is not the case for $N>3$, i.e. not all fermionic states are LU equivalent to a single occupancy state. For $N$ even, BCS states provide explicit examples for states that are not LU equivalent to any single occupancy state.

人物介绍：
Lin Chen obtained the PhD in theoretical physics from Zhejiang University, China in 2008. He was a Postdoctoral Research Fellow with the Centre for Quantum Technologies (CQT), National University of Singapore (NUS) from 2008 to 2011. Since 2011.09, Lin has been working as a Postdoctoral Research Fellow with the Institute for Quantum Computing (IQC), University of Waterloo, Canada. Lin's research interest is on the theoretical and mathematical part of quantum entanglement, quantum information and their relations with physics and computer science.